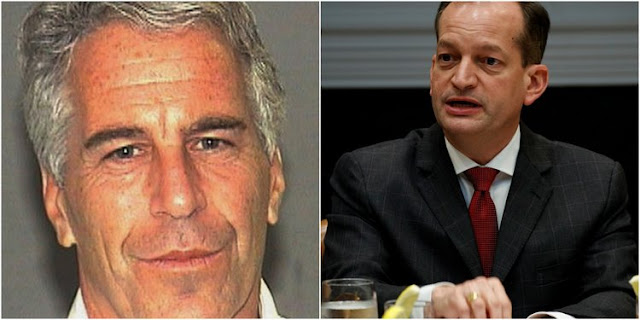 President Trump's secretary of Labor is back in the spotlight for his connection to Jeffrey Epstein after the billionaire was charged Monday with sex trafficking.

Alexander Acosta, who as a U.S. attorney oversaw a favorable 2008 plea deal for Epstein, is likely to face growing pressure as new details emerge about the financier’s alleged victimization of young girls in New York and Florida.

House Democrats have renewed their calls for Acosta to step down, and some of Trump's allies view the Labor secretary as a political liability moving forward.

“The president's going to be furious,” said former Trump campaign adviser Sam Nunberg. “I can’t imagine that he’s going to stay there for very long.”

“I'm going to give the president the benefit of the doubt that he didn’t know about the Epstein issue when he nominated Acosta,” Nunberg said. “I don’t know why he was confirmed.”

The Senate confirmed Acosta in April 2017 by a 60-38 vote. A few senators who voted to confirm Acosta have celebrated Epstein's arrest, but none of them have called for the Labor secretary to step down.

House Democrats, several of whom urged Acosta to resign in the wake of a Miami Herald report published earlier this year, revived their calls on Monday for the Labor secretary's ouster.

“Someone with such poor judgement & utter disregard for survivors should not be our Secretary of Labor.”

“Next step: getting rid of @SecretaryAcosta, who let Epstein get away with these horrendous crimes,” she added.

Earlier in the day, prosecutors in New York City unsealed charges against Epstein alleging that he engaged in sex acts with girls as young as 14 and used them to recruit other minors.

Prosecutors said they found hundreds of pictures of nude or partially nude young women and girls during a search of Epstein's Manhattan home.

Epstein has pleaded not guilty to the charges.

The president was asked Sunday as he left his New Jersey golf club whether he had any comment on Epstein's arrest, as the two men ran in the same social circles years ago.

The Trump administration remained quiet on Monday about Acosta’s role in the Epstein case and his job moving forward.

Seven Cabinet secretaries attended Trump’s remarks on Monday afternoon about the administration’s environmental initiatives, but Acosta was not one of them.

The White House previously said it was looking into Acosta’s part in the 2008 plea deal. On Monday, the press office declined to comment on Trump's response to the latest Epstein charges or whether he planned to ask Acosta to resign.

While serving as U.S. attorney in Miami in 2008, Acosta oversaw negotiations that ended with a plea deal for Epstein that allowed the billionaire to avoid federal prosecution and a possible life sentence. Instead, Epstein pleaded guilty to state prostitution charges and served roughly a year in prison.

Acosta's role in that plea deal received renewed attention earlier this year following the publication of a Miami Herald investigation that laid out Epstein's pattern of behavior.

Acosta defended the arrangement during his confirmation hearing in 2017, noting Epstein had to register as a sex offender.

A federal judge ruled in February that prosecutors in the case violated the Crime Victims Rights Act by failing to inform Epstein’s victims about the billionaire's plea deal.

The Office of Professional Responsibility, a Department of Justice agency tasked with reviewing alleged misconduct by department employees, later opened an investigation into the government's handling of the case.

Barbara McQuade, a former U.S. attorney for the Eastern District of Michigan, said that the inclusion of Epstein's conduct in Florida in Monday's charges appeared to be an “implicit rebuke of Acosta” by the Justice Department.

The New York case is unlikely to relitigate the Florida matter in any way, McQuade said, but depending on how egregious the evidence is “it could call into question the outcome of the case Acosta negotiated.”

McQuade noted that the Labor Department is responsible for enforcement of human trafficking and forced labor laws, which are separate from sex trafficking — the charges Epstein faces.

“But it all falls under the umbrella of human trafficking,” McQuade said. “So I think an insensitivity to a sex trafficking case does not speak well to someone who is entrusted to serve in that position.”