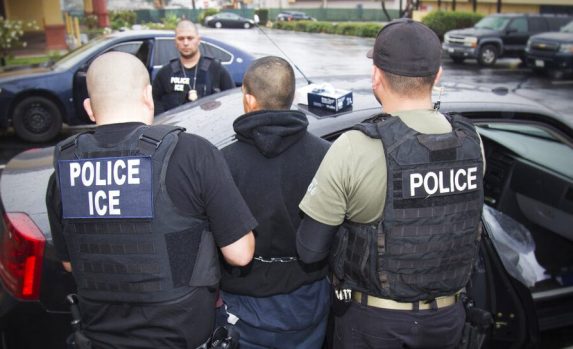 The ICE action had been set to take place in 10 major cities and target up to 2,000 immigrants, according to multiple reports.

According to the Times, officials will try to hold detained family members at centers in Texas and Pennsylvania, adding that ICE wants to deport families as quickly as possible.

The newspaper added that other undocumented immigrants caught up in the raids could also be detained.

ICE did not immediately respond to a request for comment on the report.

Trump said in late June that he was temporarily delaying the raids to give Congress time to pass new restrictions on asylum laws, which Democrats who control the House oppose.

Trump earlier this month said the raids would begin after the July 4 holiday.

The acting director of U.S. Citizenship and Immigration Services, Ken Cuccinelli, told reporters on Wednesday that the raids were “going to happen” but did not provide details.

The raids are the latest hard-line approach taken by the administration to deter migrants from making the journey from Central America to the U.S.

Trump in March threatened to close the southern border unless the flow of migrants was stemmed, eventually striking a deal with Mexico that the Department of Homeland Security has touted as lowering crossings.

Apprehensions dropped 28.5 percent between May and June, suggesting the deal had a major effect on Central American immigration.

Critics, however, say the measures have done little to deter migrants and that the fall in apprehensions is mostly due to the rising heat in the summer months, when migrants are historically less likely to cross into the U.S.

In 2018, the overall apprehensions fell by 17 percent in June, a less significant drop. However, this June still had the most apprehensions since 2004.