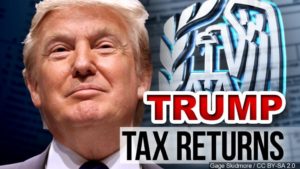 The House Ways and Means Committee on Tuesday filed its long-expected lawsuit over the Trump administration's refusal to turn over the president's tax returns, kicking off what could be a lengthy legal battle.

The committee, chaired by Rep. Richard Neal (D-Mass.), filed a complaint against the Treasury Department and the Internal Revenue Service in federal court in Washington, asking the court to order the defendants to comply with Neal's subpoenas and a section of the federal tax code.

While the president has sued to prevent lawmakers from getting their hands on documents detailing his personal finances, this is the first time House Democrats have gone to court themselves to obtain such records.

Democrats have viewed obtaining President Trump’s tax returns as one of their top oversight priorities. Trump is the first president in decades who hasn’t made any of his tax returns public, citing a years-long audit. However, the IRS has said that nothing prevents people from releasing their own tax information.

In April, Neal sent a request to the IRS seeking Trump’s personal and business tax returns from 2013 to 2018, saying that the Ways and Means Committee is conducting oversight and is interested in legislative proposals relating to how the IRS audits presidents. Neal made the request under section 6103(f) of the federal tax code, which states that the Treasury secretary “shall furnish” tax returns requested by the chairmen of Congress’s tax committees.

Treasury Secretary Steven Mnuchin rejected Neal’s request in May, saying that it lacked a legitimate legislative purpose. Neal then issued subpoenas to Treasury and the IRS for Trump’s tax returns, which Mnuchin also rejected.

“Due to that noncompliance, the Committee is now pursuing this matter in the federal courts,” Neal said in a statement.

The lawmakers argue in the lawsuit that the administration, “for what the committee believes is the first time ever” is denying their request “in order to shield President Trump’s tax return information from congressional scrutiny.”

“In refusing to comply with the statute, Defendants have mounted an extraordinary attack on the authority of Congress to obtain information needed to conduct oversight of Treasury, the IRS, and the tax laws on behalf of the American people who participate in the nation’s voluntary tax system,” the lawsuit states.

And they point to the administration’s refusal to comply with congressional subpoenas issued for the tax returns as effectively forcing the committee to go to court.

The House Democrats further argue that they need the returns to determine whether Trump has been compliant with federal tax law, and whether “the IRS’s self-imposed policy of annually auditing the returns of sitting presidents is working properly, even though it has not been updated in decades.”

“The Committee has been unable to evaluate President Trump’s claims about the audit program or investigate its other concerns because the President has declined to follow the practice of every elected President since Richard Nixon of voluntarily disclosing their tax returns,” the court filing reads.

“Without reviewing the requested return materials, the committee cannot ensure that the IRS’s audit process is functioning fairly and effectively, understand how provisions of the tax code are implicated by President Trump’s returns, or exercise its legislative judgment to determine whether changes to the code may be warranted.”

The Trump administration is expected to fight the lawsuit.

The Department of Justice’s (DOJ) Office of Legal Counsel last month issued a memo backing up Treasury’s decision to reject Neal’s request for Trump’s tax returns. In the memo, DOJ said that Neal’s stated purpose for wanting Trump’s tax returns is pretextual and that his real reason for seeking the documents is to make them public.

“The Committee’s power to conduct oversight and investigations is firmly rooted in Congress’s Article I legislative authority,” the complaint stated. “And courts have long recognized that Congress’s ‘power of inquiry — with process to enforce it — is an essential and appropriate auxiliary to the legislative function.’”

The top Republican on the Ways and Means Committee, Rep. Kevin Brady (Texas), criticized the fact that the lawsuit was authorized by the Bipartisan Legal Advisory Group, a majority-Democratic group of senior House leaders, rather than by a vote of the House.

“This is a dangerous course of action,” Brady said. “For this reason, I am introducing a resolution to preserve the integrity of the People’s House from the attacks of the elite few and restore the voice of every American.”

Neal had long expected that the tax-return matter would end up in court, which prompted him to take a careful approach in issuing his request and filing the complaint.

Last Friday, Neal sent Mnuchin and IRS Commissioner Charles Rettig a letter notifying them that the briefing reinforced the Ways and Means Committee’s need to see Trump’s tax returns as part of its oversight responsibilities.

Some progressive groups have been frustrated at times with the pace at which Neal was moving, and many praised the filing of the complaint on Tuesday.

“We commend Chairman Neal for taking this necessary action to finally get answers on behalf of the American people about what Donald Trump is hiding—and who he may be beholden to,” Stand Up America spokesman Ryan Thomas said in a statement.

“It should not take a court order to affirm that ‘shall’ means ‘shall,’” he said. “But Trump will do what it takes to delay the inevitable, hiding his tax returns as long as he can.”

The lawsuit cites other instances where the committee has invoked the statute on obtaining tax return information in the course of their investigations, including that of non-profits who were allegedly facing higher levels of scrutiny in their pursuit of a tax-exempt status allegedly due to their political affiliations.

And it points to past statements made by Trump, first as a candidate and then as president, in which he claimed he was being “unfairly” audited, as further reason to see the tax returns and review the audit process.

It also alleges that by not handing over the documents, the administration is committing a “grave” injury on the committee and “undermines the House’s unique role in the separation of powers structure that is fundamental to our system of constitutional governance.”

“Courts have recognized that the House’s power to obtain the production of papers and testimony from witnesses through compulsory process is integral to its constitutional mandate to legislate and to oversee the Executive,” the lawsuit reads.

“Permitting Defendants to impede the House’s subpoena power would imperil the separation of powers essential to the Constitution’s structure of lawful governance.”

Democrats have repeatedly pointed their court-backed right to conduct oversight in other lawsuits involving the president, including Trump’s attempts to block banks and other financial institutions to comply with congressional subpoenas for his records.

That argument has held up so far, with judges in D.C. and New York both siding with lawmakers in those lawsuits. Both of those cases are now working their way through the appeals process.

The subpoenas for Trump’s records have been issued as part of House Democrats’ exhaustive investigations into the president, his family, private businesses and administration.

Trump has promised to fight “all” the subpoenas, ensuring this attempt to get his tax returns will result in a lengthy court battle.