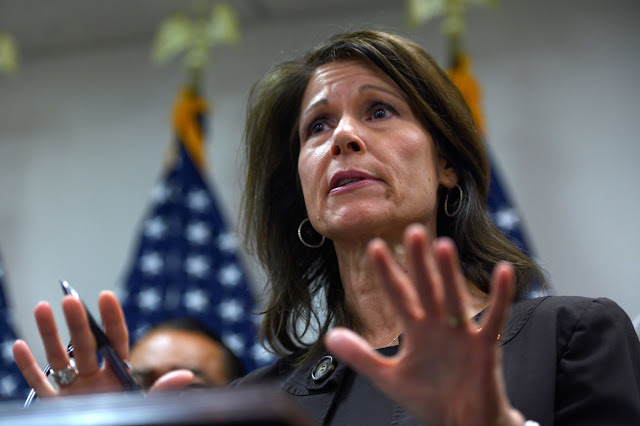 The Democratic Congressional Campaign Committee (DCCC) saw a mass departure of senior staff late Monday amid outcry over the lack of diversity within the committee's top ranks under Chairwoman Cheri Bustos (D-Ill.).

The exits come on the heels of the resignation of the committee's executive director Allison Jaslow, which she announced at an all-staff meeting earlier on Monday.

Jaslow's exit followed complaints about the lack of diversity in the senior management positions from Reps. Vicente Gonzalez (D-Texas) and Filemon Vela (D-Texas).

Gonzalez and Vela said in a statement Sunday that the committee was in “complete chaos.”

Bustos returned to Washington on Monday despite the August recess to deal with the growing outcry from black and Latino lawmakers over diversity.

The episode underscores the level of discontent with Bustos throughout the House Democratic ranks. According to one House Democrat, Bustos made promises to lawmakers of all stripes in her bid to take the reins from Rep. Ben Ray Luján (D-N.M.), and those competing pledges are a major reason for the fallout she and the committee are experiencing only seven months after she took over as chair.

“It’s the Monday Night Massacre at DCCC,” one lawmaker said. “Cheri campaigned as all things to all people, telling blue dogs one thing, telling progressives another. So inevitably once in office she would disappoint them.”

The committee released a statement late Monday announcing that Jacqueline Newman would take over as executive director on an interim basis and that the committee’s executive council will conduct a search for a new permanent executive director. According to one senior aide, Bustos has empowered the senior staffers on the council “to offer recommendations,” adding that she “followed their recommendations in this restructure.”

Among some, the committee’s day of meetings was a source of mockery, especially after a largely internally drama-free cycle under Luján, who ultimately helped win the majority for the party.

“The idea of all DCCC staff sitting around for hours on Friday and again today to talk about this internal shit enrages me,” the House Democrat said. “Shut the f**k up about your feelings and just focus on winning.”

“You know how NRCC (National Republican Congressional Committee) spent their day Friday and today? Not sitting around talking about diversity and their feelings,” the lawmaker added.

More than anything, Democrats believe the party’s campaign apparatus needs an infusion of know-how at the highest levels. As one external source put it: “They need some adults in there.”