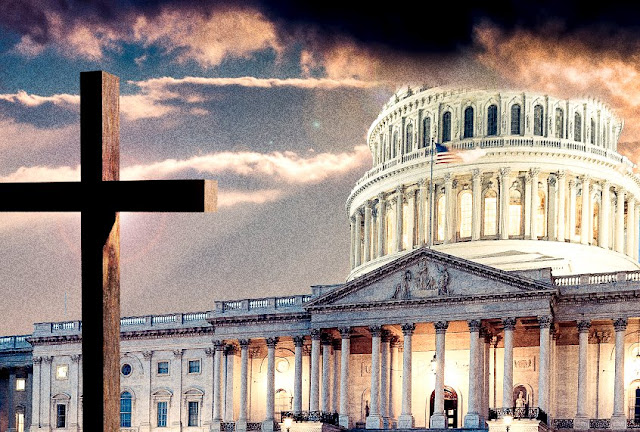 A group formed by Christian leaders warns against the rise of "Christian nationalism," saying the merging of Christian and American identities poses a threat to U.S. democracy and religious communities.

“As Christians, we are bound to Christ, not by citizenship, but by faith,” Christians Against Christian Nationalism’s statement reads.

“Whether we worship at a church, mosque, synagogue, or temple, America has no second-class faiths. All are equal under the U.S. Constitution.”

The statement is endorsed by Christian leaders from various churches and organizations, according to the group’s website.

The leaders say "Christian nationalism" seeks to bind Christianity and American citizenship in a way that “provides cover for white supremacy and racial subjugation.”

“Christian nationalism demands Christianity be privileged by the State and implies that to be a good American, one must be Christian,” the group said in its statement.

The group’s credo includes a list of beliefs centered around the constitution’s religious equality and calls on Christians to “reject this damaging political ideology.”

Among the groups endorses is Rev. Michael B. Curry, the bishop who presided over the wedding of Prince Harry and Meghan Markle.

“The violence, intimidation and distortion of scripture associated with 'Christian nationalism' does not reflect the person and teachings of Jesus Christ,” Curry said.

Below is the full statement from the group:

As Christians, our faith teaches us everyone is created in God’s image and commands us to love one another. As Americans, we value our system of government and the good that can be accomplished in our constitutional democracy. Today, we are concerned about a persistent threat to both our religious communities and our democracy — Christian nationalism.

Christian nationalism seeks to merge Christian and American identities, distorting both the Christian faith and America’s constitutional democracy. Christian nationalism demands Christianity be privileged by the State and implies that to be a good American, one must be Christian. It often overlaps with and provides cover for white supremacy and racial subjugation. We reject this damaging political ideology and invite our Christian brothers and sisters to join us in opposing this threat to our faith and to our nation.

As Christians, we are bound to Christ, not by citizenship, but by faith. We believe that:

People of all faiths and none have the right and responsibility to engage constructively in the public square.

Patriotism does not require us to minimize our religious convictions.

One’s religious affiliation, or lack thereof, should be irrelevant to one’s standing in the civic community.

Religious instruction is best left to our houses of worship, other religious institutions and families.

America’s historic commitment to religious pluralism enables faith communities to live in civic harmony with one another without sacrificing our theological convictions.

Conflating religious authority with political authority is idolatrous and often leads to oppression of minority and other marginalized groups as well as the spiritual impoverishment of religion.

We must stand up to and speak out against Christian nationalism, especially when it inspires acts of violence and intimidation—including vandalism, bomb threats, arson, hate crimes, and attacks on houses of worship—against religious communities at home and abroad.

Whether we worship at a church, mosque, synagogue, or temple, America has no second-class faiths. All are equal under the U.S. Constitution. As Christians, we must speak in one voice condemning Christian nationalism as a distortion of the gospel of Jesus and a threat to American democracy.