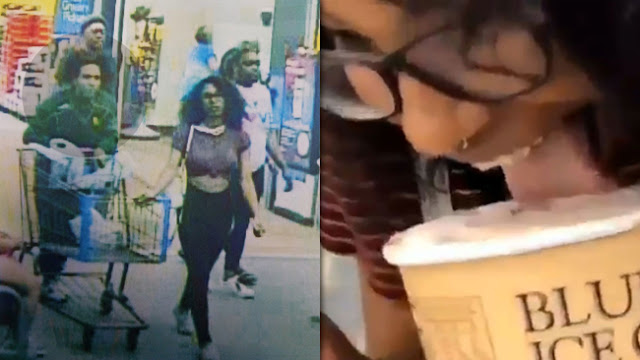 The person seen licking an ice cream container before putting it back in a Texas Walmart’s freezer was identified as a juvenile and the case has been turned over to the juvenile justice system, police said.

The female, who police say licked a tub of Blue Bell Tin Roof ice cream last week in a Walmart store in Lufkin, Texas, is a juvenile from San Antonio and her name will not be released, Lufkin Fire and Police wrote in a Facebook post. The youth's boyfriend is an adult.

"We do not intend to pursue charges against her as an 'adult' and therefore what happens from here is at the discretion of the juvenile justice system,” the statement reads. “As to whether her boyfriend will face charges, we are currently discussing his involvement with prosecutors."

Detectives have “identified and spoken with the suspect and her boyfriend in the ‘Blue Bell licking’ case,” police said. Both were “forthcoming with what occurred and admitted to the act.”

Authorities previously said the girl could face a second-degree felony charge of tampering with a consumer product, potentially facing a two- to 20-year prison sentence with fines of up to $10,000.

Police said they believe the pair entered the store on June 28 about 11 p.m. before pulling the half-gallon container off the shelf. Footage of the incident was shared on Twitter and has been viewed more than 11 million times.

Blue Bell called the incident a "malicious act" in a statement on its website.

Lufkin Fire and Police said Blue Bell had pulled all of the half-gallon containers of the ice cream flavor “Tin Roof,” which the woman can be seen licking, from the Walmart location’s shelves.

The city’s director of public safety, Gerald Williamson, said, “Our biggest concern is consumer safety – in that regard we are glad to see the tainted product off the shelves.”

A Walmart in Corpus Christi, Texas, located several hours away from Lufkin, placed an employee with a water gun outside the freezer to keep other potential ice cream lickers away.