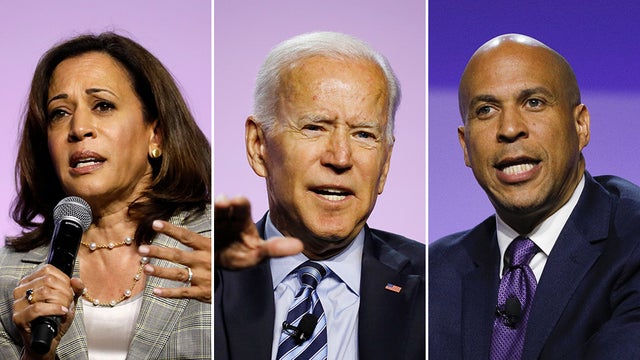 The second Democratic debate in Detroit will continue Wednesday night.

It could pack more of a punch than Tuesday’s clash, in part because it will pit the front-runner, former Vice President Joe Biden, against Sen. Kamala Harris (D-Calif.).

Harris scored big with sharp attacks against Biden in their first debate in Miami last month.

Among the candidates on stage with them this time are Sen. Cory Booker (D-N.J.), former Housing and Urban Development Secretary Julián Castro and businessman Andrew Yang.

What are the main points to look out for?

How will Biden perform?

Another weak performance from the former vice president could spark full-blown panic among his supporters.

The problem in the Miami debate was not just that Harris hit Biden on the substantive issue of his opposition to federally-mandated busing.

It was that Biden’s response was ineffective and flat. This, in turn, raised concerns about his age — he is 76 — and undermined his central argument that he is the strongest candidate to take on President Trump in November 2020.

Biden has rebounded in some opinion polls — a Quinnipiac University Poll survey released on Monday showed him leading by more than 2 to 1 over his nearest challenger, Sen. Elizabeth Warren (D-Mass.). There is clearly a sizable reservoir of goodwill toward him among Democratic voters.

But if he were to get caught flat-footed again, by Harris or anyone else, he could be in serious trouble.

Biden has in the past been a very effective debater. He acquitted himself well in both his debates as President Obama’s running mate in 2008 and 2012.

But in Detroit, battling members of his own party, Biden has to thread a fine needle. He must be assertive enough to put concerns about his vigor to rest but not so aggressive as to seem mean-spirited or condescending to fellow Democrats.

It’s a tricky challenge that makes Wednesday the biggest night of his campaign to date.

Will Harris attack or be attacked — or both?

Harris was clearly the stand-out performer of the first debates in Miami. Her jabs at Biden won her the lion’s share of media coverage in the aftermath. She also reaped a fundraising dividend and rose sharply in several polls.

It is plausible that Harris will seek to repeat the same tactic that served her so well before. But there are risks as well as potential rewards.

Harris was the aggressor in Miami but now her rivals will be tempted to hit back at her.

Biden has said he will not be “as polite” in this debate.

A new health care plan that Harris has released could also come under fire because it preserves a role for private insurers — something that she has previously sent mixed messages about.

Attacks could also come from more ephemeral figures in the field. Rep. Tulsi Gabbard (D-Hawaii), who will be on stage Wednesday, raised eyebrows last week when she said in a podcast that Harris was “not qualified to serve as commander in chief.”

Harris, whose resumé includes stints as San Francisco district attorney and attorney general of California, is a formidable debater — but she almost certainly faces a more challenging night than she did in Miami.

Can Booker have a big moment?

Booker may have built his campaign on a message of love and unity. But if the first Democratic debate carried any lesson, it’s that confrontation pays off.

Over much of the past week, Booker has taken up a more aggressive posture, touching off a clash with Biden over his record on criminal justice reform and mass incarceration. It remains to be seen whether he will bring that feud onto the debate stage. But one thing is clear: Booker needs a big moment.

The New Jersey senator has been stuck for months in the primary field's middle tier, with poll numbers consistently showing his support in the low single digits. He outraised most of his rivals in the second quarter of the year, bringing in some $4.5 million. But he’s also spending money at a faster rate than he’s bringing it in.

A standout performance on Wednesday night could give Booker the momentum he needs to start closing the gap between himself and the race’s top-tier candidates.

Of course, it’s difficult to predict when or if a candidate will have the kind of moment that boosts their campaign. But Jim Demers, a veteran Democratic strategist who’s informally advising Booker in New Hampshire, said that Booker’s team is prepared to take advantage if any such moment arises.

“I’ve been saying, and the campaign has been saying for quite some time, Booker has been building the kind of campaign that positions him very well for when he has his moment,” Demers said. “And I believe he will have his moment.”

Will any lower-tier candidates save their campaigns?

Five of the candidates that will take the stage on Wednesday night have either already qualified for the third and fourth debates this fall or are on the verge of making it.

For the other five, their fates are less clear, and the second debate may offer them their best — and potentially last — chance to stand out and rally the support they’ll need to move on to the next round.

A failure to break out at the debate, however, may force the candidates to grapple with some tough decisions, including whether to end their campaigns altogether.

“If people who are not having a lot of luck fundraising and are less than 2 percent in the polls, I think that if they don’t see a concerted bump, you’re going to see in the dog days of August, before Labor Day, a lot of people dropping out,” Jon Reinish, a Democratic strategist, said.

Will it be more exciting than Tuesday night’s debate?

For all the hype surrounding the debates, Tuesday night’s clash in Detroit was not especially compelling.

The two highest-polling candidates on the stage, Sens. Bernie Sanders (I-Vt.) and Elizabeth Warren (D-Mass.), were largely supportive of each other, sapping the event of some tension.

The most memorable single moment was Warren’s counterattack to former Rep. John Delaney (D-Md.) when she told him, “I don't understand why anybody goes to all the trouble of running for president of the United States just to talk about what we really can't do and shouldn't fight for.”

But Delaney’s status as a marginal figure in the race deprived even that exchange of real drama.

That leaves plenty of space for a true viral moment on Wednesday. And there are several candidates who could deliver one.