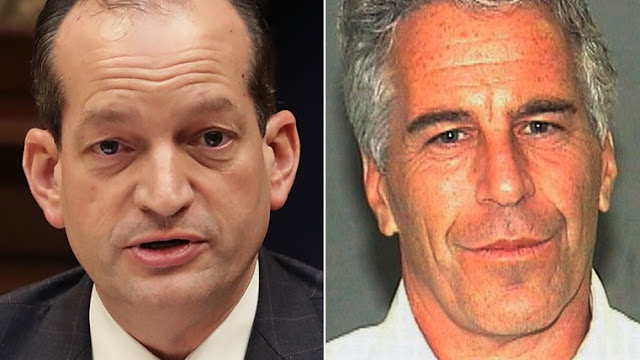 Alexander Acosta announced Friday he will resign as Labor secretary amid mounting scrutiny over his role in negotiating a secret plea deal for financier Jeffrey Epstein, who is accused of sexually abusing dozens of young girls.

Standing alongside Acosta on the South Lawn of the White House, President Trump said he “did an unbelievable job as secretary of Labor” and added it was Acosta’s decision to step down.

“This was him not me, because I’m with him,” Trump told reporters before leaving for a trip to Wisconsin and Ohio. “I hate to see this happen.”

Acosta’s resignation will take effect next Friday. Deputy Labor Secretary Patrick Pizzella will lead the department on an acting basis.

Acosta said he phoned Trump that morning to tell him he was stepping aside because he does not want his handling of the Epstein plea agreement to consume the administration.

“I did not think it was right and fair for this administration Labor department to have Epstein as the focus rather than the incredible economy,” Acosta said, adding that it would be “selfish” for him to remain in the Cabinet.

The announcement comes only two days after Acosta held a nearly hour-long news conference to defend the plea deal he brokered with Epstein a decade ago when he was U.S. attorney in Miami.

Under the deal, Epstein avoided federal charges but pleaded guilty to state prostitution charges, served 13 months in jail and registered as a sex offender.

Trump said he believed Acosta thoroughly “explained” his decision making at the news conference, which sources said the president urged him to conduct. The president praised Acosta’s performance “under pressure,” saying he did a “fantastic job.”

But Acosta's support on Capitol Hill quickly eroded in the wake of new sex trafficking charges against Epstein in New York City.

Multiple Democrats in the House and Senate had called for Acosta to resign or be fired from the Trump administration, in part because a federal judge ruled Acosta violated the law by not notifying Epstein’s accusers of the plea. The handling of the matter is also under review by the Department of Justice's Office of Professional Responsibility.

The situation became untenable for Trump, as his allies viewed the Labor secretary as a political liability. Trump has publicly praised Acosta all week, but he has been closely monitoring news coverage of the Epstein case, which has focused not only on the Labor secretary’s plea deal but also his personal relationship with the financier.

Prosecutors alleged that Epstein, 66, engaged in sex acts with girls as young as 14 and had young women recruit other girls to be part of an alleged sex trafficking operation. Epstein has denied any wrongdoing.

The charges, as well as an investigative series in the Miami Herald, brought fresh attention to Acosta’s role in the plea agreement, which critics have said was too lenient.

Acosta defended the arrangement at his Wednesday news conference, when he refused to apologize or express regret for the plea agreement.

“We did what we did because we wanted to see Epstein go to jail,” he said. “We believe that we proceeded appropriately.”

Asked by reporters on Friday about his actions, Acosta refused to engage further, saying he “already talked about the Epstein matter” at a news conference he said “was longer than any other Cabinet official in this administration.”

Trump repeatedly sought to distance himself from his onetime friend, Epstein, reiterating that he “was not a fan,”  saying he threw him out of his Mar-a-Lago club in Palm Beach, Fla. and insisting he never traveled to the financier’s private island in the Caribbean.

“It shows you one thing, that I have good taste. OK. Now other people, they went all over with him they went to his island. They went all over the place. He was very well known in Palm Beach. His island, whatever this island was, wherever it is, I was never there. Find out the people that went to the island,” Trump said.

Acosta was confirmed in April 2017 by a 60-38 vote and was the lone Latino member of Trump’s Cabinet. He was the president’s second choice to serve as Labor secretary after Andy Puzder withdrew from consideration in the face of ethics scandals.

Acosta was reportedly a source of frustration for some in the White House. He was accused of being slow to enact regulatory reforms sought by Trump and acting chief of staff Mick Mulvaney.