A modest proposal for the Texas-Mexico border crisis 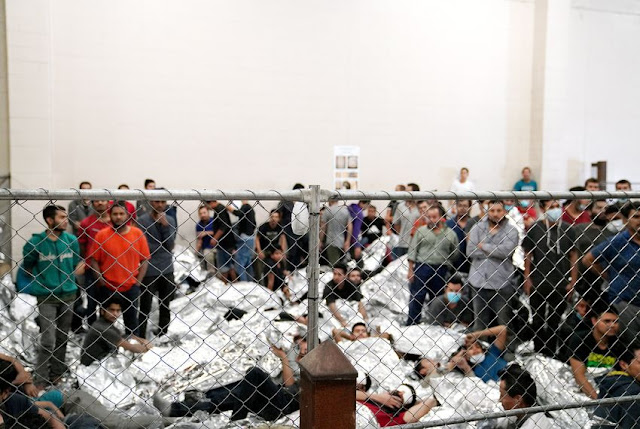 Texas voters and politicians will decide at some point whether it would be out of order to redirect some of the attention now being given to the president’s racist remarks about members of Congress back to the detention centers on the U.S.-Mexico border.

A president hammering away at his foes with an old and caustic racist slur provides heat without new information — an ugly and loathsome attempt to distract attention. President Donald Trump deserves every single bit of the backlash he’s getting for his social media blitzkrieg on four members of Congress — and broadly, on people of color and anyone who got to the U.S. after his family did. But remember, he concocted this big, stinking mess to distract us from the even bigger one on the border.

That bigger mess, with racist overtones of its own, grinds on: Those migrant kids and adults are still in custody.

It’s possible to want tighter borders, fewer immigrants, more deportations and to also believe that people ought to be treated with compassion and benevolence. A cot and a shower and a hot meal aren’t too much to ask if you’re being detained. It’s possible to enforce the rules without becoming a monster; ask any good cop, soldier or immigration agent.

You might call those children migrants, undocumented immigrants, asylum seekers, something worse or something better. But it ought to be important to everyone from immigration hardliners to open-border advocates that our federal government is holding people in unacceptable conditions for longer periods of time than is warranted or allowed by law, and doing so under the mantle of the U.S.

Nobody’s going to commission the next Emma Lazarus for this gateway.

Adults are being held, too, in even worse conditions. Vice President Mike Pence’s tense visit to the McAllen Border Station was less than a week ago. Did you get a look at the press pool report from that 90-second inspection?

“After negotiating with the VP’s office, pool was taken into an outdoor portal at the McAllen Border Station around 5 pm, where almost 400 men were in caged fences with no cots. The stench was horrendous.

“The cages were so crowded that it would have been impossible for all of the men to lie on the concrete. There were 384 single men in the portal who allegedly crossed the border illegally. There were no mats or pillows — some of the men were sleeping on concrete.

“When the men saw the press arrive, they began shouting and wanted to tell us they’d been in there 40 days or longer. The men said they were hungry and wanted to brush their teeth. It was sweltering hot. Agents were guarding the cages wearing face masks.

“Water was available outside the fences, and agents said the men could leave and get water when the press wasn’t there.

“Most of the men did not speak English and looked dirty. They said they’d been there for 40 days or more upon questioning from the pool.

“We were pulled out of the portal within 90 seconds, and a White House official said the Secret Service had expressed opposition to the Vice President going in. He briefly went into the room.”

Remember “lock them up,” the campaign chant from 2016? Here’s a modest proposal for putting that slogan to use: How’s about we lock Congress and the president in chain-link cages in warehouses or tents — without regular showers, clean clothes, hot meals and cots — until they work out an immigration policy and an enforcement scheme that work for the country without further endangering the lives of people desperate enough to try to slip across what has been a relatively porous border between the United States and Mexico for the last couple of decades?

Let them yell and call one another names. Check in once in a while to see if they’ve made any progress, if they’ve gotten frustrated enough to work on the problem instead of exploiting the problem for their varied political advantages.

It’s just a thought. But it’s possible to move elected officials from the ridiculous to the serious, and in relative short order. After all, the Texas Legislature went from sulking in the bathrooms in the 2017 session to passing difficult and consequential education and school finance legislation in the 2019 session that started less than two years later. They got serious, once they heard from voters on the campaign trail and at the polls last November.

These people represent voters, and even fear us.

The problem right now is that they’re doing what they believe we want them to do. So, what do you think is ultimately more important: actions or words?

If we move our gaze, they’ll move theirs.