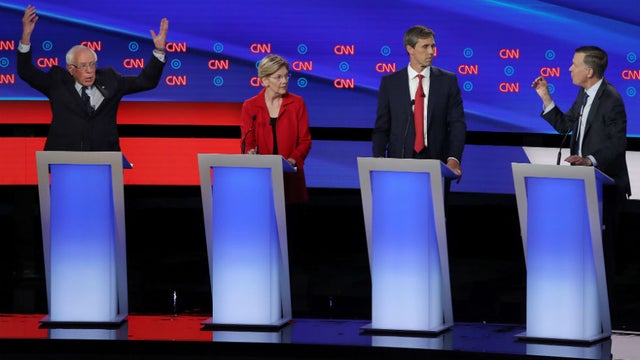 Centrist Democratic contenders slugged it out with their liberal counterparts on the first night of the second Democratic debate on Tuesday.

Here are five takeaways from a testy night in the Motor City.

A fight has been brewing for months between the Democratic primary field’s moderate candidates and progressive contenders. On Tuesday, it erupted into public view.

It was former Rep. John Delaney (D-Md.) who fired the first shot. In his opening remarks, he bluntly asserted that “we cannot go down the road that Sen. Sanders and Sen. Warren want to take us.”

But he wasn’t the only centrist to take a swipe at Sanders and Warren, who occupy the same progressive lane in the primary contest.

Former Colorado Gov. John Hickenlooper delivered a veiled but unmistakable criticism of the two liberals, saying that while he considered himself a progressive, he’s “a little more pragmatic.”

The debate underscored the increasingly volatile divide between Democrats on the direction of the party and which flank is best equipped to take on President Trump in 2020.

Moderates argue that only a compromise-minded candidate can appeal to the voters that abandoned the Democratic Party in 2016 to vote for Trump. Progressives, on the other hand, say that only bold, transformational ideas can compete with the president’s own message of political change.

2. Sanders gets lots of time, but Warren gets biggest moment

One of the biggest questions going into Tuesday night’s debate was how Sanders and Warren would handle each other; they occupy similar lanes in the primary field and are currently jockeying for second place in the polls.

But there was no fight between the two progressive standard-bearers. Instead, they found themselves forming a united front against a spate of attacks from the field’s moderate candidates, providing backup for one another on some of their signatures proposals, including, most notably, Medicare for All.

Sanders was assertive in his performance, getting perhaps more speaking time than any other candidate on stage. He scored a standout line after Rep. Tim Ryan (D-Ohio) suggested that he didn’t know just how comprehensive the health coverage provided under his Medicare for All legislation would be. The Vermont senator’s answer was pointed.

It was Warren, however, that had the biggest breakout moment. Responding to Delaney’s assertion that he was not pitching “fairytale policies,” Warren was blunt.

"I don't understand why anybody goes to all the trouble of running for president of the United States just to talk about what we really can't do and shouldn't fight for," Warren quipped, prompting a roar of applause from the audience.

Bullock, the former Montana governor, announced his arrival in the Democratic primary on Tuesday night after failing to qualify for the first debate.

At the moment, Bullock is barely registering in the polls, although that could change after his strong debate performance. But the Detroit debate is also likely to unsettle Senate Democrats, as most view him as having a far better shot at unseating Sen. Steve Daines (R-Mont.), who is up for reelection in 2020, than winning the party’s presidential nomination

Still, there are signs that Bullock could make waves in the race as a centrist who has won elections in a deep-red state.

Bullock was the first to speak on Tuesday night and wasted no time warning that the “wish list economics” of the progressive wing of the party would be a surefire loser in the Trump states that Democrats are trying to win back.

The progression of Tuesday night’s debate repeatedly pit Bullock directly against Sanders and Warren, the leading contenders on stage on Tuesday night, and he refused to back down on the key issues of immigration and health care that have divided the centrist Democrats and the progressives.

When Warren advocated for decriminalizing border crossings and giving health care to those in the country illegally, she made the case that Democrats “must not play into Donald Trump’s hands.”

“But you are playing into Donald Trump’s hands,” Bullock fired back.

And he locked horns with Sanders on Medicare for All, saying he was perplexed that Democrats would so readily abandon ObamaCare for a system that would require a whole new health industry overhaul.

“It used to be Republicans who wanted to repeal and replace, now it’s Democrats,” Bullock said.

Bullock repeatedly used Obama as a cornerstone for where he stands on immigration and health care to urge the party not to drift too far left. And he closed by striking the kind of populist tone that propelled the unlikely candidacies of both Trump and Sanders in 2016.

“Democrats often sound … like the people who shower at the end of the day are part of the problem,” Bullock said. “Far too many of them are being left behind."

No one knows what to make of author Marianne Williamson’s candidacy, but it seems all but certain she’ll stick around in the race after her turn of phrase about Trump’s “dark psychic force” became the biggest internet moment of the night.

The crowd in Detroit erupted in cheers, Twitter went into a frenzy and she immediately surged in Google searches.

Earlier in the night, Williamson lamented that the “amoral economic system has turned short-term profits for huge multinational corporations into false gods.”

Later, she made the case for reparations, “payment of debt that is owed,” as the only way to address the “emotional turbulence” of slavery.

Williamson’s campaign has bristled at media outlets that have described her as Oprah Winfrey’s “spiritual adviser.”

But the language Williamson uses is steeped in self-help and occasionally new age lingo, and she delivers it unapologetically, helping her to stand out from the crowded pack of candidates.

The unique style has turned her into an internet sensation. It might propel her into the fall debates and help her outlast some of the more traditional politicians seeking the nomination.

Former Rep. Beto O’Rourke (D-Texas) was hoping for a breakout moment. South Bend, Ind., Mayor Pete Buttigieg needed a standout performance. By the end of the night, neither candidate got what they had hoped for.

After a meteoric rise as a Senate candidate in 2018, O’Rourke has struggled to find the same popularity and enthusiasm in his presidential bid. Even before he took the debate stage on Tuesday night, he appeared intent on recapturing some of his previous energy.

He invited three Lansing, Mich., high school football players who were disciplined in 2017 for kneeling in protest during the national anthem as his guests to the debate, a move that appeared to throw back to O’Rourke’s forceful defense last year of NFL players who took a knee during the anthem.

And in the midst of the debate, O’Rourke insisted that his home state of Texas was a “new battleground state,” before recounting his closely watched, albeit unsuccessful, Senate bid in the Lone Star State.

Ultimately, though, his performance fell flat; he did not stumble, but he didn’t get the breakout moment he needed to re-energize his presidential campaign.

Buttigieg made few waves in the debate. Like O’Rourke, the South Bend mayor didn’t stumble, but the Tuesday night appearance is unlikely to be the catalyst that he needs to extend his momentum.

To be sure, Buttigieg is still polling among the top five candidates, and raised more than any Democrat in the second quarter of 2019 — a fact that his supporters tout as a sign of sustained momentum. But his poll numbers have stalled somewhat in recent weeks, prompting speculation that his rapid rise may be starting to slow down.

Of course, Buttigieg drew roaring applause at one point when he insisted that Democrats should “stop worrying what the Republicans will say” and embrace transformational proposals.

"Let's just stand up for the right policy and go out there and defend it," he said.