A few thoughts on Mueller’s testimony 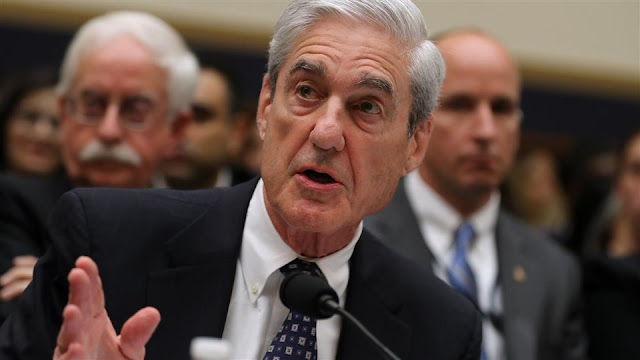 Former special counsel Robert Mueller spent almost seven hours testifying Wednesday on Capitol Hill, fielding lawmaker questions about his investigation into whether the Trump campaign conspired with Russia to interfere with the 2016 election and if President Trump obstructed justice.

In many ways, the hearing went as expected — Mueller declined to answer a wide swath of questions, and other times responded with one-word answers.

Democrats used their allotted time to shine a spotlight on key details from the 448-page report, while Republicans used their line of questioning to cast doubt on the origins of the 22-month investigation and the credibility of the special counsel’s office.

The back-to-back testimony before the House Judiciary and Intelligence committees yielded little new information, though they did succeed in elevating some aspects of Mueller’s report into the public spotlight.

Mueller, who had spoken publicly only one other time about his investigation, did not always appear sure-footed when responding, and at times flatly declined to answer questions.

Bolstered by instructions by the Justice Department that he limit his testimony, Mueller refused to indulge Republican inquiries about the so-called Steele dossier. He also sidestepped questions from Democrats about his opinion on the president’s conduct and impeachment.

At one point, he walked back an exchange with Rep. Ted Lieu (D-Calif.) by clarifying that he misspoke when he said he chose not to charge Trump because of the Justice Department Office of Legal Counsel opinion that a sitting president can’t be indicted.

“We did not reach a determination as to whether the president committed a crime,” Mueller said at the start of the second hearing.

Both sides dig in

During and following both hearings, Republicans and Democrats doubled down on their already established positions regarding the Mueller report.

Democrats who argued that Trump engaged in clear obstructive conduct for which any other American would be charged said Wednesday’s hearings crystalized that point.

And they say Mueller’s testimony confirmed that the president and his campaign engaged in unethical and unpatriotic behavior in welcoming WikiLeaks’s release of hacked Democratic communications and Russian help ahead of the 2016 election, even if the former special counsel did not find enough evidence to charge the campaign in a broader conspiracy with Russia.

Republicans mostly stuck to questions around leaks to the media during the investigation, the Steele dossier, and alleged anti-Trump bias among FBI agents and members of Mueller’s team. They argued that the Russia investigation was a “hoax” — a characterization Mueller disputed.

Trump lawyer Jay Sekulow said in a statement during the hearings that Mueller’s testimony “revealed that this probe was conducted by a small group of politically-biased prosecutors who, as hard as they tried, were unable to establish either obstruction, conspiracy, or collusion between the Trump campaign and Russia.”

Impeachment efforts unlikely to get a boost

House Democrats had high hopes for Mueller’s congressional appearance, particularly among the impeachment crowd. But his testimony appears to have done little to move the needle on impeachment.

While many Democrats publicly heralded Mueller’s testimony as a resounding success, he did not substantively give Trump’s critics much in the way of new ammunition.

They sought to get Mueller to highlight some of the main findings from the report in large part because a majority of the country has not read the full text.

Mueller was not direct in his criticism and warnings for Trump, but he landed a few punches.

While many Democrats publicly heralded Mueller’s testimony as a resounding success, he did not give Trump’s critics much in the way of new ammunition.

The former FBI director avoided Democrats’ requests to read directly from his report, leaving it to multiple members to read the passages themselves. His refusal to do so delivered a blow to Democrats, who hoped the well-respected prosecutor would explain on camera, in his own words, the key episodes of obstruction of justice that he examined.

Democrats also wanted to highlight some of the main findings from the report, especially since a majority of the country has not read the full text.

Democrats now face the risk that the public’s interest will wane as the House breaks for a six-week recess that starts two days after Mueller’s testimony.

Speaker Nancy Pelosi (D-Calif.) has pushed back against impeachment efforts, instead seeking to direct the focus on Democrats’ multiple investigations into Trump and his administration. Pelosi signaled at a press conference Wednesday evening that her position on impeachment hadn’t changed.

“My position has always been, whatever decision we make in that regard would have to be done with our strongest possible hand, and we still have outstanding matters in the courts,” Pelosi said when asked about impeachment. "We want to have the strongest possible case to make a decision as to what path we will go down."

But she added after the hearings that Mueller’s testimony helped raise “public awareness.”

There could be a small trickle of Democrats who express their support for impeachment following Mueller’s testimony, which was considered by some on the left as an opportunity to change their position and come out in favor of impeachment. One such lawmaker was Rep. Lori Trahan (D-Mass.), who pointed to “Mueller’s message” in her statement calling for an impeachment inquiry.

“Whether we decide to impeach the president in the House or we do not, we must take whatever action necessary to protect the country while he is in office,” Schiff said.

GOP lawmakers were able to land some blows early on in the hearings, as Mueller struggled in the hot seat.

Rep. John Ratcliffe (R-Texas), who was yielded time by GOP colleagues during both hearings, emerged as one of the more memorable Republicans in questioning Mueller. The former federal prosecutor grilled Mueller on his decision to not fully exonerate Trump from accusations of collusion with Russia, claiming Mueller broke with Justice Department principles.

Ratcliffe, whose name has been linked to potential administration posts, left Mueller little opportunity to respond. In later exchanges, however, Mueller appeared to regain his footing, offering a robust defense of the objectivity of his team under questioning by Rep. Kelly Armstrong (R-N.D.).

Trump took a victory lap shortly after the hearings wrapped up, telling reporters at the White House it was “a very good day.”

Mueller wasn't always direct in his remarks about Trump, but he made a few critical statements about the president.

In his strongest criticism of Trump to date, the former special counsel spoke out against the president’s past praise for WikiLeaks.

"Problematic is an understatement in terms of what it displays in terms of giving some, I don't know, hope or some boost to what is and should be illegal activity," Mueller said of Trump’s comments, which were favorable of WikiLeaks after the organization released emails hacked from 2016 Democratic presidential nominee Hillary Clinton’s campaign.

Mueller repeated his past assertion that his report did not exonerate Trump, as the president and his allies have repeatedly argued.

And he said that his office did not weigh whether there was any “collusion” as it’s not a legal term, but that his team of prosecutors did not have sufficient evidence to charge Trump campaign officials with conspiring with Russians to interfere in the 2016 election.

Trump has argued time and time again that Mueller found there was no collusion.

Mueller also took aim at one of the president’s favorite attacks on the special counsel’s probe.

"It is not a witch hunt," Mueller said of his investigation.

"When the president said the Russian interference was a hoax, that was false, wasn’t it?” Schiff then asked.

At the same time, Mueller made sure to keep the door open on potential charges against Trump, saying a president can be indicted for obstruction of justice after leaving office.