2020 likely to be another close presidential election 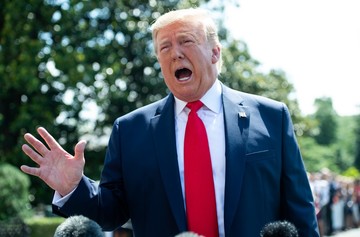 With Robert Mueller’s testimony largely being greeted as a dud, the Trump reelection campaign is probably high-fiving this evening. Even after a controversial week, the president’s approval rating is hitting a record high in the NPR/PBS survey, public concern about immigration is reaching a record high, and the Democrats are just beginning what is likely to be a long and nasty presidential primary.

The big three that decided the election were Michigan (where Trump won by 10,704 votes) Wisconsin (where he won by 22,748 votes) and Pennsylvania (44,292 votes). As many have observed since the final tally in 2016, this means about 77,744 Americans made the difference in that election. For perspective, the average home attendance of the Michigan Wolverines last season was 110,736.

In other words, if Democrats can add less than a full football stadium’s worth of votes to Hillary Clinton’s total in those three states in the right proportion, they’ll win the presidency. And for what it’s worth, his approval rating in those three key states is currently in the low-to-mid 40s and he’s losing head-to-head matchups with Joe Biden in these states by a wide margin.

But a lot of the discussion around 2020 is overlooking a bunch of other states that should be considered jump balls.

(You know which traditional swing state doesn’t look all that competitive anymore? Ohio. Trump’s margin there was 446,841 votes!)

And it’s easy to forget Trump held onto Nebraska’s Second Congressional District by just 6,534 votes. The 2020 election probably won’t come down to a single electoral vote… but stranger things have happened.

But there’s a flip side to this, which is that if Trump can do a little better in 2020 with the advantages of incumbency, a bunch of blue states appear within grasp. Democrats ought to keep in mind that Hillary Clinton won New Hampshire by just 2,736 votes. Clinton and Trump split the congressional districts in Maine, winning one electoral vote each, and she won the statewide total (and the other two electoral votes) by a margin of 20,035 votes.

Clinton’s margin in Nevada wasn’t that much bigger at 27,202 votes. And if the Trump team thinks it can outperform their 2016 totals by a five-figure sum in key states, two more states appear within reach. Clinton’s margin in Minnesota was just 44,593 votes; in New Mexico, 65,567 votes.

Will Trump have some advantages from incumbency and (presuming it lasts) a healthy economy? Sure. But there is also an unknown number of voters who cast ballots for him in 2016 as a gamble and who may be unimpressed or looking for someone new. Suburban women fled the GOP in 2018, a phenomenon that would make Trump’s reelection almost impossible if it continues in 2020.

President Trump’s approval rating in the latest Fox News Channel poll is one point higher than President Obama’s approval in late July 2011. Does this mean he, too, will win a second term? Not necessarily. Karlyn Bowman and Eleanor O’Neil of the American Enterprise Institute note some differences between the two presidents in the latest edition of the AEI Political Report.

For one thing, while their approval ratings are about the same, Trump’s disapproval (51 percent) is higher than Obama’s (46 percent) at this point in his term. Bowman and O’Neil also note that in the May 2019 Fox News poll, “higher percentages of registered voters have said they definitely plan to vote against Donald Trump in 2020 than said the same about Barack Obama at a comparable time in the 2012 election cycle.”

Forty-six percent of registered voters told Fox News they would definitely vote for someone else in 2020. Forty-four percent said the same in August 2011. Similarly, in the May–June NPR/Marist poll, 51 percent of registered voters said they definitely plan to vote against Trump. Thirty-six percent said the same of Obama in June 2011.

Trump begins his reelection campaign with about half of registered voters dead-set against him. It’s a situation he’s used to! One problem for Democrats, though, is that the voters who express high disapproval of Trump and who say they are certain to vote against him tend to be clustered in already blue states. That is why you see some recent analyses highlighting the possibility of another split between the Electoral College and popular vote next year.

Today’s polling data may not tell us much about what will happen in November 2020 — it’s far too early in the cycle. But it does remind us that Barack Obama and Donald Trump are in some sense mirror images: Not only in public policy, but also in political polarization.