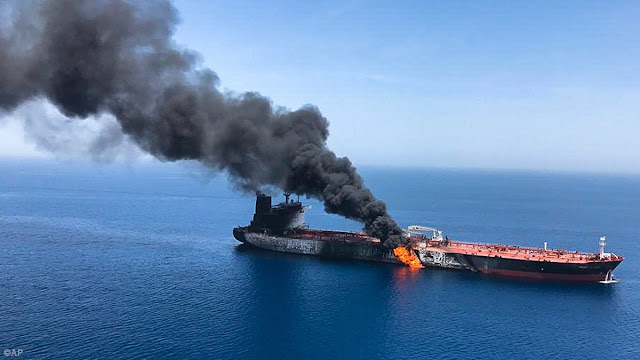 Different stories are emerging about an attack on two oil tankers after the Trump administration blamed Iran for the incident.

U.S. Central Command has released a video it says shows the Iranians removing a magnetic mine from one of the tankers as evidence to support the U.S. allegation against Iran.

But experts continued to debate whether the video indeed proves the U.S. claim. And the owner of the Japanese tanker in the U.S. video has disputed a key aspect of the U.S. narrative.

Here are five things to know about the attack:

What happened in the Gulf of Oman

While most Americans were still asleep early Thursday morning, reports of two oil tankers being attacked in the Gulf of Oman began to surface.

Pictures and video of the Altair aflame quickly circulated online.

The USS Bainbridge guided missile destroyer was in the area and responded, arriving at 11:05 a.m. local time and taking in the entire 21-person crew from the Courageous, according to Centcom.

The incident came amid heightened tensions between the United States and Iran after the U.S. military deployed more forces to the region in response to unspecified threats from Iran.

It also came weeks after similar attacks on four oil tankers off the coast of the United Arab Emirates. U.S. officials had already said those attacks were caused by Iranian limpet mines, magnetic naval mines named after an aquatic snail.

The United States is blaming Iran

Hours after Thursday’s attack, Secretary of State Mike Pompeo publicly blamed Iran, saying “it is the assessment of the United States government that the Islamic Republic of Iran is responsible.”

Pompeo did not present any evidence to back up his assertion, and Iranian Foreign Minister Javad Zarif denied Iran’s involvement by saying the U.S. leveled the accusation without “a shred of factual or circumstantial evidence.”

But late Thursday night, Centcom released video and photos it said did support the allegation.

The two photos show the Courageous at different angles with a hole in the hull, as well as an object protruding from the hull. The hole is labeled “damage,” while the object is labeled “likely mine.”

The video, meanwhile, shows a small boat approaching the Courageous and then those aboard the boat removing the object from the side of tanker. Centcom described the video as showing an Islamic Revolutionary Guard Corps (IRGC) Gashti Class patrol boat “removing the unexploded limpet mine.”

In an interview on “Fox and Friends” on Friday morning, Trump cited the video in blaming Iran, suggesting Iran was trying to cover up its involvement.

“Iran did do it, and you know they did it because you saw the boat,” Trump said. “I guess one of the mines didn't explode, and it has probably got essentially Iran written all over it, and you saw the boat at night trying to take the mine off and successfully took the mine off the boat and that was exposed and that was their boat, that was them and they didn't want the evidence left behind.”

Outside analysts, allies have doubts

Centcom’s release has done little to quell the debate about what happened.

“The evidence that the U.S. has presented so far is neither clear nor conclusive. What is needed is an impartial international investigation,” Ali Vaez, Iran project director at the International Crisis Group, said in an email.

An analysis written by the Center for Strategic and International Studies’ Jon Alterman noted that Pompeo did not characterize the level of confidence in his assessment as is standard for intelligence despite being the former CIA director.

“I presume that there is some other evidence that has not been made public that has been shared with allies,” Alterman wrote. “And I don't know of any contravening evidence against the assessment that Secretary Pompeo laid out yesterday, but I am struck at how much skepticism I am hearing from former senior U.S. government officials and from abroad.”

Bellingcat, an open-source investigation group, said the small boat shown in Centcom’s video matches a type of vessel known to be used by the IRGC.

But it said it could not verify the object removed was a mine nor who placed it there in the first place.

“It should be stressed that we have no insight into what the motivation was to remove the object, something that can only currently be speculated on with the available evidence,” Bellingcat added on Twitter.

Many U.S. allies have also notably not joined in attributing the attack to Iran.

Germany, in particular, specifically said the Centcom video was not enough to prove Iran is to blame.

“The video is not enough. We can understand what is being shown, sure, but to make a final assessment, this is not enough for me,” German Foreign Minister Heiko Maas told reporters in Oslo.

“It is almost certain that a branch of the Iranian military — the Islamic Revolutionary Guard Corps — attacked the two tankers on 13 June. No other state or non-state actor could plausibly have been responsible,” the U.K. Foreign Office said in a statement.

Further adding to the confusion, the operator of the Courageous contradicted a key part of the U.S. narrative Friday.

Speaking at a news conference in Tokyo, Kokuka Sangyo Co. president Yutaka Katada said those aboard the ship reported seeing “flying objects” just before the attack.

He said he believes those objects could have been bullets.

“I do not think there was a time bomb or an object attached to the side of the ship,” he said.

In other words, he does not think the damage to the tanker was caused by a limpet mine.

Centcom did not explicitly say the damage on the Courageous was caused by a mine, but that was the strong suggestion. And in the cases of the May tanker attacks, U.S. officials did explicitly say Iranian limpet mines were used.

Regardless of whether Iran did in fact carry out the attack, the risk of war between the United States and Iran has escalated after the incident, some experts and lawmakers are warning.

Sen. Bernie Sanders (I-Vt.), who is also running for the Democratic presidential nomination, warned Friday that war with Iran would be an “unmitigated disaster.”

“Attacks on oil tankers in the Gulf of Oman are unacceptable and must be fully investigated,” Sanders said in a statement. “But this incident must not be used as a pretext for a war with Iran, a war which would be an unmitigated disaster for the United States, Iran, the region and the world.”

Vaez said Thursday’s incident is not likely itself to be a “casus belli,” a Latin phrase meaning an act that provokes war.

But, he added, the situation grows more dangerous with each incident.

“Reality is that through its hostile policy toward Iran, the Trump administration has created an environment ripe for inadvertent conflict,” he said. “But each cycle of escalation is bringing the two sides to the brink of a catastrophic confrontation that could easily trigger a regional conflagration.”

In its statement Thursday, Central Command said it does not seek war, but stressed the United States will defend itself.

“The United States has no interest in engaging in a new conflict in the Middle East,” Centcom spokesman Capt. Bill Urban said. “However, we will defend our interests.”