Trump under pressure for trade deal with China 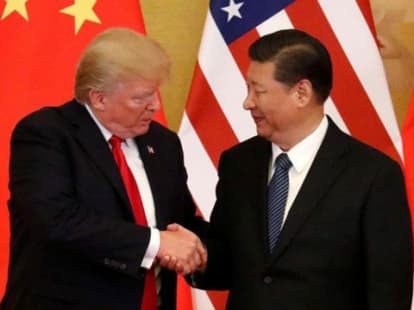 President Trump is under intense pressure to make progress toward a trade deal with China at this weekend’s Group of 20 summit in Japan, as lawmakers and businesses anxiously wait for an end to damaging tit-for-tat tariffs.

Trump is set to meet Saturday with Chinese President Xi Jinping in a bid to revive negotiations that fell apart in May. The summit is the latest attempt to cement a deal to lift U.S tariffs on Chinese goods in exchange for structural reforms meant to curb alleged Chinese trade abuses and technology theft.

The trade war between the world’s two largest economies has hindered economic growth in both nations over the past 12 months. U.S. tariffs on $250 billion in Chinese goods have strained China’s slowing manufacturing sector, while Beijing has targeted the ailing U.S. agricultural sector with levies on $60 billion in American crops and livestock.

Those tensions will come to a head this Saturday as Trump and Xi sit down with pressure to break the deadlock in trade negotiations. If the two make progress, it could clear the path toward an eventual deal to eliminate tariffs. But if Trump emerges unsatisfied or empty-handed from his meeting with Xi, that could risk escalating a trade war with severe economic and political costs.

Trump threatened to impose tariffs on $300 billion in Chinese goods after trade talks broke down in May. If carried out, that would likely prompt retaliation from China, which has also considered blocking exports to the U.S. of rare earth minerals essential for technology manufacturing.

Trump insists that the U.S. will benefit even if the trade war with China escalates, telling Fox Business Network on Wednesday that his “Plan B” is to “take in billions and billions of dollars a month and we’ll do less and less business with them.”

“I view tariffs differently than a lot of other people,” Trump added. “It’s possible we’re going to make a deal but I’m also very happy where we are now. We’re taking in a fortune and frankly not a good thing for China but it’s a very good thing for us.”

While Trump claims that China will bear the brunt of new tariffs, economists have warned that the new import taxes could risk a recession as the president seeks to win a second term campaigning on the strength of the economy.

New Chinese tariffs on U.S. crops and livestock could also be a devastating blow to the ailing agricultural sector and red-state farmers who have stood by Trump through the pain.

The first step toward a broader deal is likely an agreement to halt further tariffs while negotiations continue, which Xi reportedly demanded as a condition for meeting with Trump.

Ahead of the Xi summit, Trump administration officials have expressed optimism over further talks with China.

Treasury Secretary Steven Mnuchin told CNBC on Wednesday that the two countries “were about 90 percent there” on agreeing to a pact before Chinese officials backtracked on several agreements.

“I think there’s a path to complete this," Mnuchin added.

Trump though has struggled to make good on his pledge to revive U.S. manufacturing through tougher trade terms with major economic partners. Manufacturing activity in the U.S. has slowed while trade talks with China fail to yield success and Trump’s renegotiated North American trade pact stalls in Congress.

If Trump is unable to come away with even a moderate victory against China, it could damage his standing in states like Ohio, Michigan, Wisconsin and Pennsylvania that have lost industrial jobs for decades. Those states were crucial to Trump’s victory in 2016 and could make or break his reelection bid.

Higher tariffs on Chinese goods and the expected retaliation against American farmers could also hamper the U.S. economy, which is already expected to slow over the next 18 months.

Despite the economic risks, Republican lawmakers have given the president unequivocal support in his battle with China, even as farmers in their states and districts suffer under retaliatory tariffs.

“He's using the tools at his disposal to get a good deal for the American farmer. Is it painful? Yes, it is very painful,” said Sen. Joni Ernst (R-Iowa), citing the plight of Iowa soybean farmers who have lost billions in sales due to tariffs from China.

Sen. John Kennedy (R-La.) said that while “the only way to win a trade war is to not fight it,” he praised Trump for taking action to halt Chinese trade “cheating.”

“This is not just about trade war. This is about whether or not China is going to participate in the world economy,” Kennedy said. “The president thinks that tariffs are the way and so far he’s right.”

But lawmakers will be looking for any signs of progress this weekend.

“If we can get a good deal out of this pain right now, we can endure,” said Ernst.

Trump’s tariffs were successful in bringing China to the negotiating table, but the president still faces several other economic and political challenges.

Trump has demanded stricter protections for U.S. intellectual property technology, along with greater U.S. access to Chinese financial markets. That would require China to overhaul its economy in ways long resisted by Beijing, raising doubts about the viability of a larger deal.

China has also insisted that Trump lift the tariffs he imposed on Chinese goods, which Trump has ruled out doing on several occasions. And Trump’s blacklisting of Huawei, a Chinese tech firm with purported ties to the country's intelligence agencies, has also become entangled in talks.

For Trump, the stakes are high for Saturday's meeting.

Analysts at Washington-based Beacon Policy Advisors wrote in a Wednesday research note that the Trump administration optimism could be a “miscalculation” with the looming presidential election.

“The US-preferred deal is not in play, and it may never have been as close as he and his advisors think it was,” they wrote.

“In China, Xi knows that the closer they get to the 2020 elections, the more likely it will be that Trump needs to agree to a deal to show his base that he can score a win.”