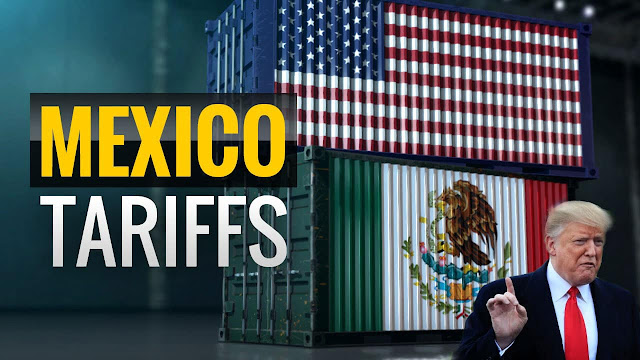 President Trump said Wednesday that “not nearly enough” progress was made in negotiations with Mexican officials over curbing illegal migration, adding the U.S. plans to go ahead with punitive tariffs starting Monday.

The talks at the White House were a part of a last-ditch effort by Mexico to avert the tariffs, which are set to begin at 5 percent and could increase to 25 percent by October if the Trump administration deems Mexico has not done enough to crack down on migration and criminal gangs. Trump said the talks would resume on Thursday.

“If no agreement is reached, Tariffs at the 5% level will begin on Monday, with monthly increases as per schedule. The higher the Tariffs go, the higher the number of companies that will move back to the USA!” the president tweeted.

Trump said the discussions yielded progress on key issues, “but not nearly enough,” citing a report the Department of Homeland Security released earlier on Wednesday saying that border arrests in May had hit 133,000—a total not reached in more than a decade.

The results appeared to have been released on Wednesday to put added pressure on Mexico.

Vice President Pence led the U.S. delegation in place of Trump, who is in Europe. Mexican Foreign Secretary Marcelo Ebrard and other top officials huddled with their counterparts in the Roosevelt Room for roughly 90 minutes, according to the White House.

Ebrard said in a press conference afterwards that both delegations acknowledged more needed to be done to stem the flow of migrants to the U.S., which is mostly coming from Central America.

“Both sides recognized that the current situation cannot be maintained as it is,” said Ebrard, alluding to May's border crossing numbers.

Trump, speaking earlier Wednesday, expressed confidence that Mexico wants to reach a deal to avoid tariffs but said it must demonstrate it is able to “stop” illegal migration, a goal that has not been achieved in recent history.

“Mexico can stop it. They have to stop it. Otherwise, we just won’t be able to do business. It’s a very simple thing,” the president told reporters while in Ireland.

The White House has been vague about what Mexico must do to avoid the tariffs, much to the chagrin of Mexican officials and lawmakers on Capitol Hill who oppose the duties.

White House trade adviser Peter Navarro, who has pushed for the tariffs, said earlier Wednesday they might not need to take effect at all.

“We believe that these tariffs may not have to go into effect precisely because we have the Mexicans' attention,” Navarro said on CNN.

U.S. officials have pressured Mexico to increase security on its southern border with Guatemala, a key crossing point for migrants, increase intelligence sharing in the fight against gangs and reach a new agreement with the administration on asylum seekers, who make up a large number of the people crossing the U.S. southern border.

Trump last Thursday announced his plan to impose a 5 percent tariff on all Mexican goods amid mounting frustration over his administration’s inability to stem what it has called a migration “crisis.”

The tariff will increase by 5 percentage points each month until Mexico does enough to satisfy Trump’s demands.

The decision was made over the objection of some of his aides, who warned it could hurt the U.S. economy and stall congressional approval of Trump’s revision of the North American Free Trade Agreement.