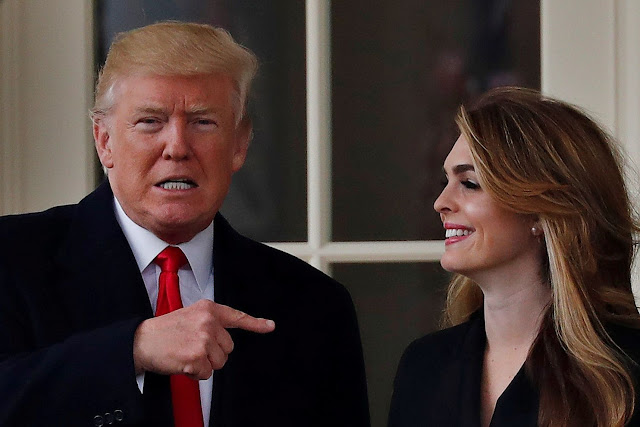 The White House is arguing that former aide Hope Hicks is “absolutely immune” from being compelled by Congress to testify about her time working in the Trump administration, in an effort to limit her closed-door interview Wednesday.

White House counsel Pat Cipollone sent a letter to House Judiciary Committee Chairman Jerrold Nadler (D-N.Y.) on the eve of Hicks’s scheduled closed-door testimony, notifying the top Democrat that President Trump had instructed Hicks not to answer the panel’s questions about her time working in the White House.

“Ms. Hicks is absolutely immune from being compelled to testify before Congress with respect to matters occurring during her service as a senior adviser to the President,” Cipollone wrote Tuesday.

“Because of this constitutional immunity, and in order to protect the prerogatives of the Office of the President, the President has directed Ms. Hicks not to answer questions before the Committee relating to the time of her service as a senior adviser to the President,” he wrote.

The committee, which is pursuing a sweeping investigation into alleged abused of power by Trump, reached a deal with Hicks to submit to a closed-door interview on Wednesday pursuant to a subpoena.

Democrats are eager to question Hicks, the former White House communications director and ex-Trump campaign aide, about the campaign’s activities and the episodes of potential obstruction of justice by Trump that are detailed in special counsel Robert Mueller’s report. Hicks was interviewed by Mueller and her testimony is cited frequently in Mueller’s report.

The White House’s efforts to limit her testimony are likely to infuriate Democrats who have accused Trump and his administration of going to unprecedented lengths to stonewall their investigations and oversight requests.

Hicks will be accompanied by at least one White House lawyer, who is expected to raise any objections to questioning on Wednesday.

Cipollone’s letter cites various Office of Legal Counsel (OLC) opinions in arguing that Hicks is immune from compelled testimony about her work in the White House, including the one issued by the Justice Department in May that Trump cited when instructing former White House counsel Don McGahn not to testify before the committee pursuant to a subpoena.

Cipollone also indicated that the White House may try to block Hicks from answering questions about her time on the presidential transition because of potential executive privilege concerns.

“Accordingly, her responses to specific questions about this period would likely implicate executive branch confidentiality interests concerning that decisionmaking process,” he wrote. “In order to preserve the President’s ability to assert executive privilege over such information, a member of my office will attend Ms. Hicks’s testimony on June 19.”

A Judiciary aide said Tuesday that the committee wants the White House to record any specific assertions of executive privilege during Hicks’s interview on Wednesday. The White House has thus far stopped short of making a formal assertion of privilege to prevent former officials from testifying before Congress.

If Democrats are unsatisfied with Hicks’s testimony on Wednesday, they could go to court to enforce the subpoena for her testimony and documents.

The White House earlier this month instructed Hicks to not comply with the committee’s demands for documents related to her time working in the administration. Hicks has provided some records related to her work on the Trump campaign.