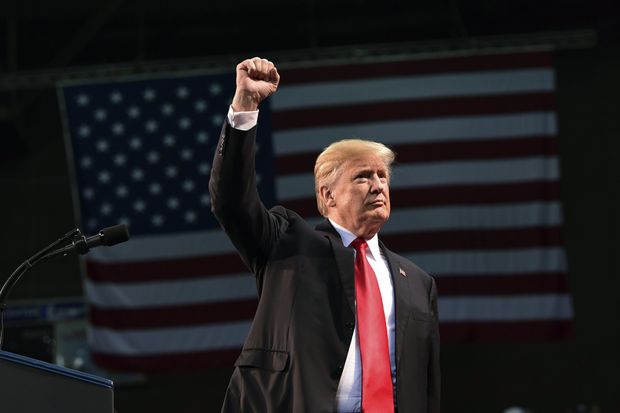 President Trump will officially launch his reelection campaign Tuesday evening with a rally at the 20,000-person capacity Amway Center in Orlando, Fla.

What are the key points to look out for in Trump’s speech?

The Trump camp sees Biden as its most threatening challenger — not just because the former vice president is, for the moment, the clear Democratic front-runner but also because he is much harder to tar as a “socialist” than some of his rivals for his party’s nomination.

Trump has been fond of branding Biden “Sleepy Joe” in a not-so-subtle allusion to Biden’s age, even though at 76 he is only three years older than Trump. But will Trump try to build a broader — or more personally scorching — critique of Biden at this point?

Biden has been stressing his electability against Trump, vowing Monday that he could win Republican strongholds such as Georgia and South Carolina as well as more traditional battleground states. Trump may hit back Tuesday.

It will also be telling whether Trump takes aim at any of the other 2020 Democrats. The president tends to jab at people more vigorously when he sees them as a serious danger.

Does he mention health care?

He also told his interviewer, George Stephanopoulos, that the administration would be offering the specifics “in about two months, maybe less.”

There are several problems here.

Firstly, there has been no sign at all that such specifics are imminent.

Secondly, the Republican Party has never come up with a cogent, agreed-upon alternative to the Affordable Care Act, or ObamaCare, in the nine years since it became law.

Thirdly, a Trump promise as recently as late March that Republicans would find some way of fully repealing and replacing ObamaCare was met with consternation on Capitol Hill.

“I made clear to him that we were not going to be doing that in the Senate,” Majority Leader Mitch McConnell (R-Ky.) told reporters at the time.

Trump seems to see merit in continuing to talk about health care, however. It is possible he hopes to defang the kind of Democratic attacks over the issue that were so effective in the 2018 midterms.

But the thought of fighting an election on health care sends a chill through much of the GOP.

Does he use Robert Mueller as a foil?

Trump’s most headline-grabbing comment of recent days was his acknowledgement, in the ABC News interview, that if he were offered negative information on an opponent by a foreign government, “I think I’d take it.”

Trump also said that FBI Director Christopher Wray was “wrong” to have said, in May, that a recipient of such information should contact the bureau.

The comments left some Republicans holding their heads.

At a time when the GOP, and the administration more broadly, is trying to portray allegations of collusion with Russia as yesterday’s news, Trump put them center stage again in the most explosive fashion possible.

Those attacks appear to be of limited usefulness among the general electorate.

An NBC News/Wall Street Journal poll in early May had 60 percent of respondents disagreeing with the idea that Trump had been “honest and truthful” regarding the investigation.

A survey from Quinnipiac University Poll in late April showed 72 percent of respondents asserting that Mueller’s investigation had been fair and only 18 percent disagreeing.

But the MAGA-hat wearing base, Trump’s audience in Orlando, have savored his attacks on Mueller — one more piece of evidence, to them, that the president is unfairly maligned.

A second-term agenda or a ‘greatest hits’?

Trump knows what works for him at his rallies — essentially, a rundown of certain policies and slogans that have become as familiar as a music playlist that leans on Elton John and the Rolling Stones.

But will his supporters keep eating up references to building the border wall and keeping America great again, or will they want to know more about what Trump actually proposes to do if given a second term?

Right now, the smart money is still on the greatest hits. There is not yet a clear Trump second-term agenda, and the president’s team can justifiably argue there is plenty of time for that to come into focus between now and November 2020.

Still, the president could make some news if he provides even a glimpse of something fresh for a potential second Trump term.

Does he stay on message or step on his message?

There’s no doubt what the president’s allies in the Republican Party would like him to do: stay focused on touting his economic record from now until Election Day, while throwing in some bruising attacks on the Democrats.

But Trump is famous for ad-libbing during his rallies and for going off-script to deliver crowd-pleasing lines.

Sometimes that can work with the people in attendance but stir controversy far from the debate stage.

Back in September 2017, a Trump rally ostensibly in support of then-Sen. Luther Strange in the Republican candidate’s home state of Alabama was derailed by the president’s verbal attack on NFL players who “take a knee” during the national anthem to protest racial injustices in policing.

Trump savors those kinds of incendiary moments, but their political effectiveness is highly questionable.

Will he do something similar on Tuesday?