Shanahan out as Defense Secretary nominee 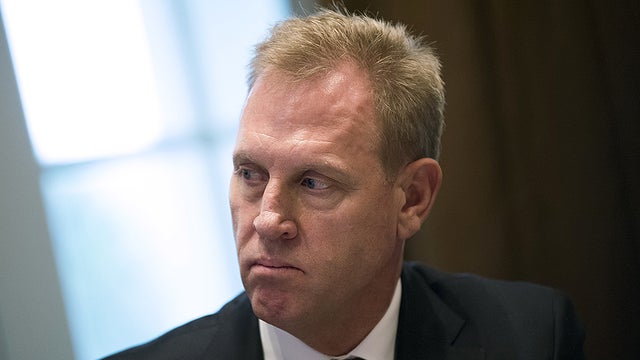 Trump said in a pair of tweets Shanahan wanted to “devote more time to his family.” The messages were posted shortly after the publication of multiple media reports describing past domestic violence incidents involving Shanahan’s family.

“Acting Secretary of Defense Patrick Shanahan, who has done a wonderful job, has decided not to go forward with his confirmation process so that he can devote more time to his family,” Trump tweeted.

Shanahan said in a statement that going forward with the confirmation process “would force my three children to relive a traumatic chapter in our family’s life and reopen wounds we have worked years to heal.”

“I would welcome the opportunity to be secretary of Defense, but not at the expense of being a good father,” he said.

The president said he would name Mark Esper, who currently serves as secretary of the Army, as the new acting Defense chief. Trump did not say if Esper would be nominated for the permanent role. Esper is a former infantry officer and previously served as a top executive at the defense contractor Raytheon.

The decision leaves the Pentagon without a permanent leader at a time of rising tensions with Iran, which the Trump administration has accused of attacking oil tankers in the Persian Gulf. The administration on Monday ordered another 1,000 troops to the Middle East.

Trump’s announcement Tuesday came just over an hour after USA Today reported that Shanahan’s FBI background check was being held up by an alleged 2010 domestic fight with his now-ex wife.

The White House first announced in May that Trump intended to nominate Shanahan as Defense secretary. But his nomination was never officially sent to the Senate. As more and more time passed, questions began to swirl about whether Trump was souring on Shanahan.

Shanahan himself said he had “no concerns” about the background check.

But after rumors circulated under the radar for weeks, reports began to come out publicly this week that the process was being marred by the alleged domestic incident.

As reported by USA Today, police reports and court filings showed that an August 2010 fight with his ex-wife escalated into a physical clash. The wife, Kimberley Jordinson, reportedly told police he punched her in the stomach, while he told police she was the aggressor and punched him “10 or 20 times.”

She was arrested on suspicion of domestic violence, but prosecutors later dropped the charges citing a lack of evidence.

The Washington Post on Tuesday also detailed a 2011 incident in which Shanahan’s son hit Jordinson with a baseball bat and left Jordinson unconscious in a pool of blood.

“Bad things can happen to good families . . . and this is a tragedy, really,” Shanahan told the Post in an interview published shortly after Trump’s tweets. Dredging up the episode publicly, Shanahan said, “will ruin my son’s life.”

Shanahan’s road to becoming Defense secretary had been rocky from the start. The 30-year Boeing executive, whose first job in government was as deputy Defense secretary in the Trump administration, was dogged by allegations of tipping the scales for his former employee while serving in the Pentagon.

An inspector general investigation that concluded in April cleared Shanahan of the charges of violating his ethics agreement.

Shanahan also faced questions about his level of experience and ability to handle weighty strategic issues having only served in government since 2017.

The questions were amplified by comparisons to his predecessor, Jim Mattis, who senators from both parties admired as one of the so-called “adults in the room” reining in Trump’s more dangerous impulses.

Shanahan, by comparison, was viewed as more deferential to Trump. He told Pentagon officials after Trump’s announcement of a Space Force that “we are not the Department of No.”

His departure also highlights Trump’s reliance on acting officials to serve in top administration posts, as the president has struggled to fill those jobs.

In total, Trump has withdrawn 38 nominees for Senate-confirmed posts, according to the non-profit Partnership for Public Service.

The White House’s nomination process has oftentimes been derailed by vetting issues, such as Trump’s pick last year of former top White House doctor Ronny Jackson to be secretary of Veterans Affairs. Jackson’s nomination was later withdrawn after allegations of workplace misconduct surfaced.

Trump has also decided not to officially nominate others to key posts after Republican senators said they would not confirm them, including conservative commentators Herman Cain and Stephen Moore to open seats on the Federal Reserve board.