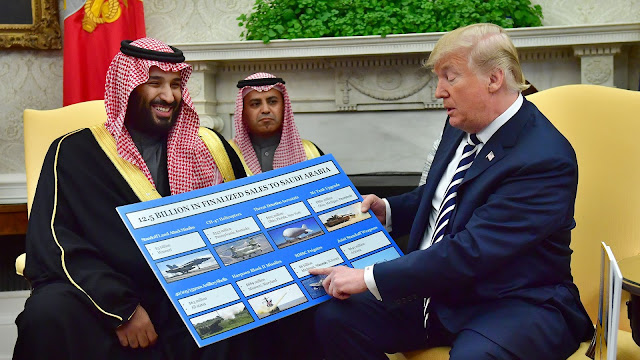 The Senate voted Thursday to block President Trump’s Saudi arms deal, paving the way for a veto clash with the White House.

They voted 51-45 to block the additional 20 arms sales. Murkwoski flipped to vote for the sale, while Lee did not vote.
The Senate is expected to block the entire arms deal on Thursday with two additional, subsequent back-to-back votes.

The sale, estimated to be worth more than $8 billion, would provide weapons to Saudi Arabia, as well as the United Arab Emirates and Jordan.

But it sparked widespread backlash in Congress after Trump used an “emergency” provision of the Arms Export Control Act (AECA) to sidestep the 30-day notification to lawmakers about a pending sale.

Sen. Bob Menendez (D-N.J.), who sponsored the resolution, argued that Congress needed to send a message that U.S. alliances with Saudi Arabia or the UAE are “not a blank check.”

“For months upon months, this administration has failed to demonstrate how equipping the Saudis with more weapons would improve the Saudis’ respect for human rights in Yemen or advance America’s own values and national security interests,” Menendez said.

Sen. Chris Murphy (D-Conn.) added that if lawmakers didn’t try to block the sale they were effectively allowing this administration and future administrations to ignore Congress on arms sales.

“If we don’t take a positive vote here, we are giving away this priority potentially forever, because you know, this emergency in the Middle East is not a new emergency,” he added.

Under the AECA, lawmakers can block an arms sale with only a simple majority, instead of the 60 votes normally needed to pass legislation in the Senate.

House Democrats have pledged they will also pass resolutions blocking the sale.

Neither chamber is expected to be able to muster the two-thirds votes necessary to override all-but-guaranteed vetoes from Trump in response.

But Thursday’s votes are an unprecedented move, reflecting growing frustration on Capitol Hill about the U.S.-Saudi relationship and coming after two votes fell short in recent years to block arms deals with Saudi Arabia. One, in 2016, garnered support from only 27 senators. The other, in June 2017, had the backing of 47.

Since then, U.S.-Saudi relations have soured further amid growing concerns about Saudi Arabia’s involvement in the years-long Yemen civil war and the death of Washington Post contributor and U.S. resident Jamal Khashoggi in 2018. Congress passed a separate resolution earlier this year forcing Trump to remove troops in or affecting Yemen unless they were fighting al Qaeda; Trump vetoed the resolution.

In addition to the arms sale votes on Thursday, Menendez announced that he had reached a deal with Sen. Jim Risch (R-Idaho), the chairman of the Foreign Relations Committee, to hold a committee vote on legislation limiting which countries a president can use the “emergency” provision to sell arms to and a broader Saudi bill being worked on by Risch.

The administration has hit back at criticism from Congress over its tactics on the arms deal, arguing that a heightened threat from Iran is its justification in invoking the emergency.

“These sales and the associated emergency certification are intended to address the military need of our partners in the face of an urgent regional threat posed by Iran; promote the vitality of our bilateral relationships by reassuring our partners; and preserve strategic advantage against near-peer competitors,” R. Clarke Cooper, the assistant secretary of State for political-military affairs, told the House Foreign Affairs Committee.

They’ve been backed up by most Republicans including Risch and Majority Leader Mitch McConnell (R-Ky.), both of whom made the case for rejecting the resolutions ahead of Thursday’s votes.

“I don’t think there’s anyone on this floor that is averse to the idea that action needs to be taken, and obviously the relationship is not the same as it’s been for a long time. Having said that, on a transactional basis, there are a number of basis that we are allied with the Saudi Arabians on,” Risch said.

McConnell urged his colleagues to reject the effort to block the arms sale, arguing there were other steps lawmakers could take, including visiting the region or meeting with Saudi officials.

“Rejecting long-planned arms sales strikes me as an overly blunt tool with several unintended consequences,” McConnell said. “The dynamics at play are not black and white. We can best shape these dynamics by working closely with our partners to encourage them in the right direction rather than turning our back.”