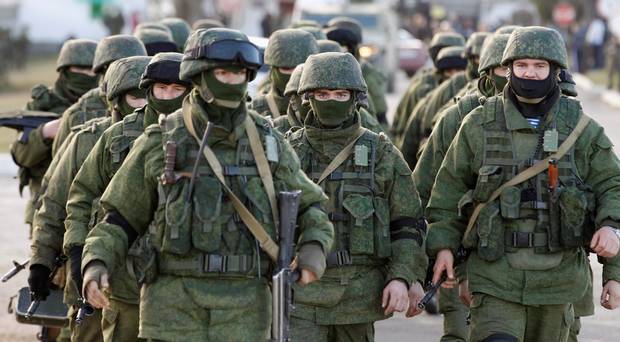 U.S. intelligence officials say that Russian forces are undergoing a "significant" military buildup in the contested Ukrainian region of Crimea, including around Soviet-era military installations.

One U.S. official told Defense One on Wednesday that satellite imagery of Russian positions in the region depicted “a deliberate and systematic buildup of their forces on the peninsula.”

The official added that Russia's buildup meant that the country's ability to strike targets in Eastern Europe now extended as far as the Black Sea.

“The combat radius covers all Ukraine and beyond the Black Sea. It significantly increases their strike options, potentially extending to the Middle East,” the official reportedly said.

A second official added that Russian forces could "strike targets beyond the Black Sea, including southern Europe and Syria, without even departing Sevastopol.”

The buildup of Russian forces comes despite demands from the U.S. and other NATO countries dating back to 2014 which demand the return of Crimea to Ukraine before normalized relations with Russia can continue. Russian forces have reportedly shown no signs of preparation to depart the area.

Sarah Bidgood, an expert on nonproliferation efforts throughout Russia and the former Soviet Union, told Defense One in a statement that increased forces in Crimea “suggests that Russia is interested in being able to exercise more control over the Black Sea, which then affords them the ability to project power beyond their immediate environment."

“This is a significant buildup. NATO is going to be under increasing pressure from allies in the region to show that it’s able to push back against Russian attempts to gain greater control of the Black Sea," Bidgood, a professor at Middlebury College, told Defense One, adding: "To me, that’s a really dangerous environment.”

The U.S. has maintained a position that Crimea belongs to Ukraine, and in November imposed sanctions on Russian businesses and individuals accused of operating in the region.

"Treasury remains committed to targeting Russian-backed entities that seek to profit from Russia’s illegal annexation and occupation of Crimea," a spokesman for the Treasury Department said last year.

"Our sanctions are a clear reminder that efforts seeking to normalize investment and economic relationships with those operating in Crimea will not be tolerated," the spokesman added at the time.