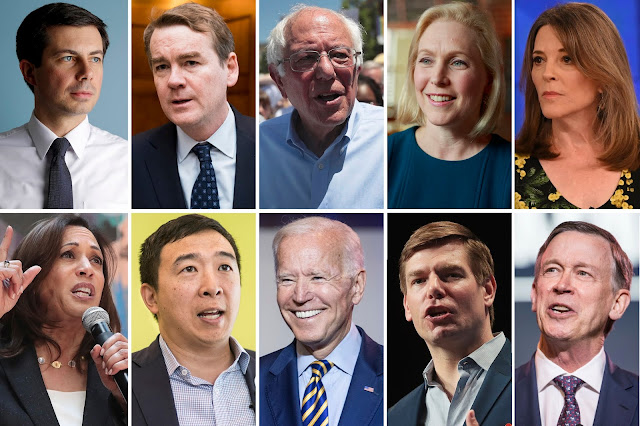 Front-runner Joe Biden faltered in the Democratic presidential primary debate here Thursday evening, suffering some damage at the hands of rivals while also stumbling of his own accord.

The former vice president hit particularly rocky ground when he was confronted by Sen. Kamala Harris (D-Calif.) on his recent warm words for two Southern segregationists of a previous era, the late Sens. James Eastland (D-Miss) and Herman Talmadge (D-Ga.).

That exchange was the emotional high point to the two-hour debate, as Harris noted that she herself had been a beneficiary of busing as a child. She called Biden’s comments on the segregationist senators “hurtful.”

Biden defended himself on a finer point, saying he opposed busing by the Department of Education, believing instead that the issue should be decided at a local level.

But the exchange was not a good one for the former vice president — not least because of the visual dynamics of a 76-year-old white man appearing to lecture a black woman 22 years his junior.

But that was not Biden’s only problem.

At one point, he said the National Rifle Association was “not the enemy” — a bad choice of words for a Democratic primary electorate, even in the service of his broader argument that gun manufacturers were the main obstructors of new laws.

He also defended his vote to give then-President George W. Bush the power to go to war in Iraq, arguing that Bush had abused that power.

On Iraq, Biden was left vulnerable to the inevitable attack from Sen. Bernie Sanders (I-Vt.), who took the opportunity to remind voters that, in contrast to Biden, he had “led the opposition to that war, which was a total disaster.”

Biden was always destined to be the central figure in Thursday’s debate. He is the clear leader in opinion polls. In the current RealClearPolitics national average, he commands the support of 32 percent of Democrats, almost twice as many as his closest rival, Sanders.

But skeptics have long doubted the depth and durability of his support, especially in a party where the energy seems to be on the left.

Biden was not dominant at any point, though he spent much of the debate trying to placate progressives who will be vital in the primary.

He insisted that, if elected, he would repeal the Trump administration’s 2017 tax cut, rejoin the Paris climate accord, make college more affordable and support expanded health care, for which undocumented immigrants would also be eligible.

Overall, however, his uneven performance likely did him more harm than good, especially given the high expectations that attend any front-runner.

The second night of debates here was always likely to be more fiery than Wednesday given that four of the five top-polling candidates — Biden, Harris, Sanders and South Bend, Ind., Mayor Pete Buttigieg — were on stage.

On Thursday, Harris was the notable standout. Summoning her experience as a former prosecutor, she delivered crisp and powerful answers, particularly on issues like health care.

Breaking through a squabble between Sanders, Rep. Eric Swalwell (D-Calif.) and Sen. Kirsten Gillibrand (D-N.Y.), she reprimanded her rivals that Americans were less interested in a “food fight” than on how they were going to keep “food on the table.”

Harris also found an artful way to hit Biden for his support of large-scale deportations during the Obama administration.

“On this issue, I disagreed with my president,” she said — simultaneously highlighting her dissent, implying an underlying loyalty to Obama and taking a subtle jab at Biden.

Sanders, for his part, laid out the central rationale for his candidacy repeatedly and energetically. He argued that he was the candidate who could bring “real change” to the American political system.

The Vermont Independent was also the first to hit President Trump hard, branding the president “a phony and a pathological liar and a racist.”

If Sanders did not carve out any one outstanding moment, he at least reminded the voters who rallied behind him in 2016 why they did so — and perhaps helped himself hold off the rising challenge from Warren for progressive support.

Buttigieg, the final member of the top five, showed his formidable communication skills on issues ranging from gun violence to immigration. On the latter, he segued into a criticism of Republicans who advertise their religiosity on other topics.

It was absurd, he contended, to pretend that “God would smile at the division of families at the hands of federal agents.”

Buttigieg also appeared penitent about race relations in his home city, which have been particularly contentious in the wake of the fatal shooting of a black man, Eric Logan, by a white police officer.

The debate overall was much more boisterous than the previous night’s event, with the moderators often struggling to keep control.

The cross-talk and fractiousness made for more compelling television, though it remains to be seen whether the candidates who were most determined to insert themselves into as many exchanges as possible — notably Swalwell and Gillibrand— helped or hurt themselves in the process.

They, and the other lower-polling candidates, did not break through the aural clutter on Thursday, in contrast to former Housing and Urban Development Secretary Julián Castro, who shone the previous night.

Thursday was all about the top figures in the field.

And it’s Biden who looks more vulnerable than ever before, having failed to pass his first big test.