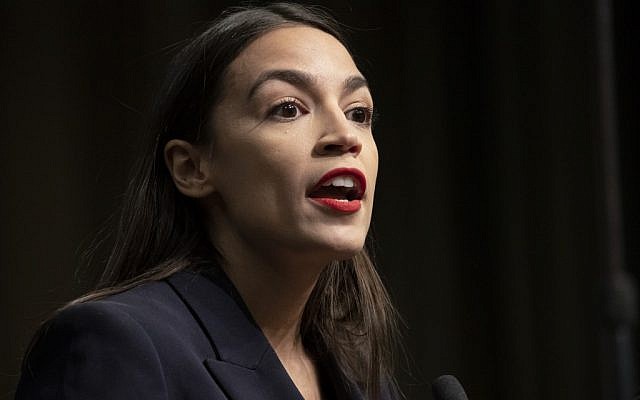 Rep. Alexandria Ocasio-Cortez (D-N.Y.) created a new political firestorm Tuesday, stating that detention centers housing immigrants are “exactly” like concentration camps and then doubling down in the face of GOP criticism.

“The U.S. is running concentration camps on our southern border, and that is exactly what they are,” Ocasio-Cortez said during an Instagram Live appearance on Monday night.

“If that doesn’t bother you ... I want to talk to the people that are concerned enough with humanity to say that ‘never again’ means something.”

She spoke the same night President Trump in a message on Twitter said that Immigration and Customs Enforcement next week would begin deporting “millions” of immigrants who are living in the U.S. illegally.

Republicans accused Ocasio-Cortez of demeaning victims of Holocaust death camps with the comparison.

“Please @AOC do us all a favor and spend just a few minutes learning some actual history. 6 million Jews were exterminated in the Holocaust. You demean their memory and disgrace yourself with comments like this,” tweeted Rep. Liz Cheney (R-Wyo.), the third-ranking House Republican.

“This is wrong @AOC. These are incredibly dangerous and disgusting words that demean the millions murdered during the Holocaust,” tweeted Sen. Rick Scott (R-Fla.).

And Rep. Dan Crenshaw (R-Texas) pushed back against Ocasio-Cortez’s definition of a concentration camp, noting that many of the migrants detained for trying to cross the border illegally are asylum-seekers awaiting court proceedings.

“Clearly I need to explain that, in concentration camps, people are unjustly sought out and confined. This isn’t what is happening at the border,” Crenshaw wrote.

The vice president of the National Border Patrol Council, a labor union that represents border agents, also pushed back during an appearance on Fox News on Tuesday.

“It’s disgusting to compare concentration camps to what the men and women are doing here protecting our country,” Art Del Cueto said on “America’s Newsroom.”

Ocasio-Cortez doubled down in the face of criticism, tweeting that the Trump administration has established “concentration camps” where immigrants are “being brutalized with dehumanizing conditions and dying.”

“And for the shrieking Republicans who don’t know the difference: concentration camps are not the same as death camps. Concentration camps are considered by experts as ‘the mass detention of civilians without trial.’ And that’s exactly what this administration is doing,” Ocasio-Cortez wrote, pointing to an Esquire article quoting historians who said the U.S. detention facilities at the southern border meet the definition of a concentration camp.

The back-and-forth comes as lawmakers consider Trump’s request for $4.5 billion in emergency funds to help deal with the flow of migrants at the southern border. Trump’s request includes $3.3 billion for humanitarian aid to help with care for unaccompanied minors and families crossing the border, as well as $1.1 billion for other operations like increasing the number of detention beds.

Ocasio-Cortez has emerged as a favorite target for Republicans along with two other freshman Democrats, Reps. Ilhan Omar (Minn.) and Rashida Tlaib (Mich.). Omar and Tlaib, the first two Muslim women elected to Congress, previously have been embroiled in storms surrounding accusations of anti-Semitism for comments they made about Israel.

The remarks from Omar in particular have divided House Democrats, with some criticizing the freshman after she suggested in a tweet that political support for Israel was “all about the Benjamins.”

Republicans and the White House have used the remarks to nakedly cast Democrats as an enemy of Israel and American Jews, who in presidential elections have largely voted for Democratic candidates, according to exit polls. Democrats are likely to face questions about whether they agree with Ocasio-Cortez’s comments about concentration camps and the Trump administration’s detention centers as they return to Washington this week.

On Tuesday, Democrats pointed to a recent New York Times report documenting how a 4-month-old Romanian boy who arrived at the southern border with his father was separated for months from his family under the Trump administration’s family separations policy.

“Call it a concentration camp or call it something else. What’s happening on our southern border is moral stain on the U.S. Cruelty as policy means these children are in impossible and inhumane situations,” tweeted Sen. Brian Schatz (D-Hawaii).

“When I went down to see those facilities, I can tell you that it’s deplorable. And it’s inhumane with how those children are being treated,” Luján said.

The Health and Human Services Department, which operates the Office of Refugee Resettlement, said last week that about 1,400 immigrant children will be sent to an Army base in Oklahoma. The base also was used as a temporary shelter in 2014, during the Obama administration.

“It is sick. I mean, the reality is we have detention facilities designed for 4,000 people under Border Patrol’s control, but they have 19,000 people there. Why do they have 19,000 people? Because people like Rep. Ocasio-Cortez refuse to acknowledge the problem and help us fund this by bringing a supplemental to the floor to pay for humanitarian aid and detention facility beds, along with other things,” Biggs said at a press conference on Tuesday with other members of the conservative House Freedom Caucus.