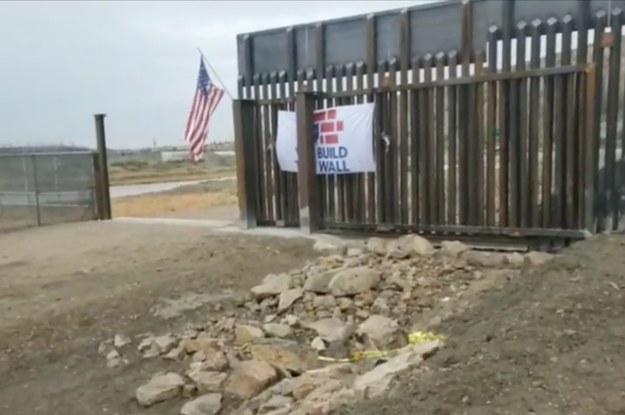 Officials have ordered a privately funded section of wall on the U.S.-Mexico border to keep its gate open indefinitely, saying organizers failed to obtain required permits, according to BuzzFeed News.

The International Boundary and Water Commission (IBWC), which oversees waterway issues between the U.S. and Mexico, said the organizers of We Build the Wall, which raised more than $23 million, had not obtained permission to build on federal land.

The half-mile barrier, on the border near Sunland Park, N.M., restricts access to a public monument and waterways, according to the IBWC.

"This is normally done well in advance of a construction project," IBWC spokesperson Lori Kuczmanski told BuzzFeed News. "They think they can build now and ask questions later, and that's not how it works."

The Hill has reached out to the IBWC for further comment.

On Monday, IBWC officials propped open a large gate built into the wall, which had prevented access to a levee and a dam as well as a historic monument that begins a series of obelisks marking the border, BuzzFeed reported.

"We're going to lock it in an open position until we come into a mutual decision on how this gate is going to operate," Kuczmanski told the outlet.

Brian Kolfage, the Air Force veteran who founded the wall fundraiser, accused the IBWC of “over stepping DHS [Department of Homeland Security] and national security experts” with the move.

Kuczmanski said the agency had been told the project would be restricted to private land before organizers submitted a letter with “a couple of drawings” requesting permission to build the gate across federal property.

"It was not a complete application packet," she said.

Officials found the next day that the construction crew had already poured a cement slab on federal land and shut the gate upon completion, according to Kuczmanski.

"This is policy and procedure, and you don't just come into our property and build first," Kuczmanski said. "We're treating them the same we treat anybody else."

The privately funded wall at the southern border has been the source of other controversy, with the mayor in Sunland Park filing a cease-and-desist order late last month after the group began building the wall.