Photo of drowned father and daughter underscores crisis at border 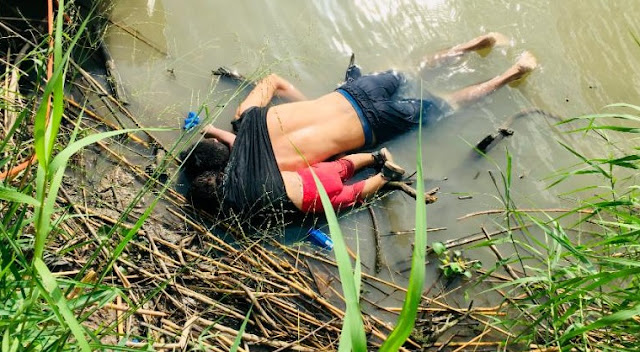 A photo captured earlier this week that shows a drowned migrant father and his 23-month-old daughter lying face down in the Rio Grande has sparked backlash across social media.

According to The Associated Press, the photo shows the bodies of the two migrants from Salvador, Óscar Alberto Martínez Ramírez and his young daughter, Valeria. It was captured on Monday by journalist Julia Le Duc in Matamoros, Mexico.

The news agency reported that Ramírez had tried to swim across the river with his young daughter and wife, Tania Vanessa Ávalos, after his family after was unable to request asylum in the United States.

Ávalos reportedly told police that her husband was able to make it safely across the river with his daughter initially. But she later said that as her husband swam back to help her cross, their daughter jumped into the water after him. Ávalos said her husband died trying to save their daughter after they both were caught in a current.

The photograph has sparked a wave of outrage online from a number of journalists and activists.

When pressed about the dramatic incident on Tuesday, Mexican President Andrés Manuel López Obrador
said it was “very regrettable that this would happen.”

“We have always denounced that as there is more rejection in the United States, there are people who lose their lives in the desert or crossing” rivers, he continued.

According to The Associated Press, a number of other migrants have lost their lives trying to make the harrowing journey across the U.S.-Mexico border in recent weeks, including a woman and three children who were found dead of heat-related causes over the weekend.

The report comes as President Trump has made cracking down on illegal immigration a focus of his administration as he seeks reelection in 2020.

The president made headlines last week after he threatened that Immigration and Customs Enforcement (ICE) would soon begin deporting millions of undocumented immigrants in a move that would have led to the deportations of up to 2,000 immigrant families.

However, he later reversed his decision over Twitter on Saturday, saying that that he would temporarily halt the ICE operation for two weeks, pending negotiations with Congress on an immigration agreement.