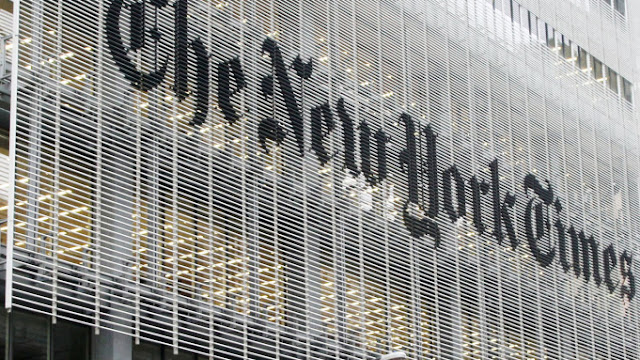 Sulzberger wrote that Trump's attack crossed "a dangerous line" in his "campaign against a free and independent press."

"He’s gone from misrepresenting our business, to assaulting our integrity, to demonizing our journalists with a phrase that’s been used by generations of demagogues," Sulzberger wrote of Trump.

"Now the president has escalated his attacks even further, accusing the Times of a crime so grave it is punishable by death."

Sulzberger's remarks came after Trump accused the Times of committing a "virtual act of treason" last week after the newspaper reported about the U.S. increasing its cyberattacks on Russia's electric power grid. The Times, citing current and former government officials in its report, noted that the actions are a warning to Moscow on how the Trump administration is using new authorities to unleash cyber tools in an aggressive manner.

“Do you believe that the Failing New York Times just did a story stating that the United States is substantially increasing Cyber Attacks on Russia. This is a virtual act of Treason by a once great paper so desperate for a story, any story, even if bad for our Country,” Trump tweeted.

On Monday, he called for the newspaper to release its sources for the report, tweeting that it "must be held fully accountable."

The Times stood by its story following Trump's remarks, stating that "accusing the press of treason is dangerous."

Sulzberger hit back against Trump's remarks in his op-ed, accusing the president of "rhetorical recklessness."

“There is no more serious charge a commander in chief can make against an independent news organization,” Sulzberger wrote. Which presents a troubling question: What would it look like for Mr. Trump to escalate his attacks on the press further? Having already reached for the most incendiary language available, what is left but putting his threats into action?”

Sulzberger said The New York Times contacted several Trump officials to confirm the administration had no national security concerns about the story.

“I met with the president in the Oval Office earlier this year and told him directly that authoritarian leaders around the world, with growing impunity, are employing his words to undermine free expression. The president expressed concern and insisted he wanted to be viewed as a defender of the free press,” Sulzberger said.

“But in the same conversation, he took credit for the term 'fake news,' a phrase that has now been wielded by dozens of leaders across five continents to justify everything from the passage of anti-free-speech laws in Egypt to the takeover of independent news organizations in Hungary to a crackdown on investigations into genocide in Myanmar,” Sulzberger continued.

He added that “the Times has sought to serve America and its citizens by seeking the truth and helping people understand the world.”

“There is nothing we take more seriously than doing this work fairly and accurately, even when we are under attack. Mr. Trump’s campaign against journalists should concern every patriotic American. A free, fair and independent press is essential to our country’s strength and vitality and to every freedom that makes it great,” he wrote.