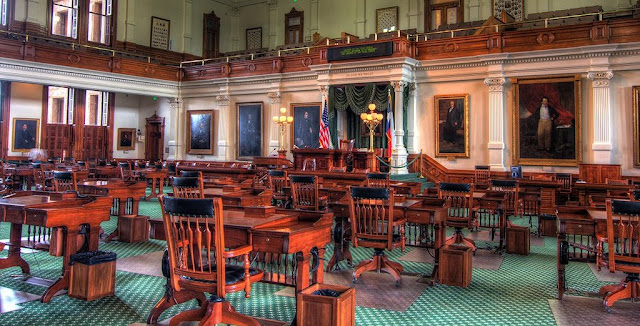 The Texas Senate’s roll-call votes from this year’s regular session make it possible, as we did earlier with the House, to rank the state’s 31 senators from left to right on the political spectrum.

Political scientists have for decades used roll-call votes cast by members of the U.S. Congress to plot them on the Liberal-Conservative dimension along which most legislative politics now takes place. This ranking of the Texas Senate does the same — by drawing on the 1,387 non-lopsided roll-call votes taken during the 2019 regular session. As with previous rankings conducted in 2017 (post-special session), 2017 (regular session), 2015, 2013 and 2011, this one uses a Bayesian estimation procedure belonging to the family of methodological approaches that represent political science’s gold standard for roll-call vote analysis.

In the chart below, Republicans are indicated by red dots and Democrats by blue ones. Based on the roll-call vote analysis, it provides a mean ideal point for each senator, referred to as the Lib-Con Score, along with the 95 percent credible interval (CI) for that estimate. If two legislators’ CIs overlap, their positions on the ideological spectrum might be statistically equivalent, even if their Lib-Con Scores are different. Also included are vertical dashed black lines, which indicate the location of the median Democratic and Republican senators. (Here’s a table with the 31 senators ranked from most liberal to most conservative.) 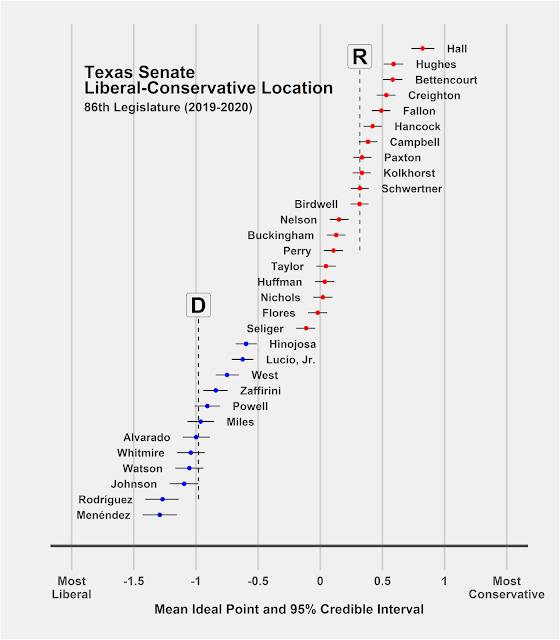 The 19 Republican senators fall into three general groups. Bob Hall of Edgewood is in a group of one at the conservative end of the ideological spectrum. His Lib-Con Score is significantly more conservative than that of every other GOP senator.

The more centrist of these two groups ranges from Jane Nelson of Flower Mound to Kel Seliger of Amarillo. Seliger can be seen as representing a somewhat distinct centrist wing within this group.

The 12 Democratic senators also fall into three general groups. At the centrist end of the ideological spectrum are three senators, Juan “Chuy” Hinojosa of McAllen, Eddie Lucio Jr. of Brownsville and Royce West of Dallas. Hinojosa and Lucio have Lib-Con Scores that are significantly more centrist than those of all of the other nine Democrats, while West’s is significantly more centrist than those of seven of the nine more liberal Democrats.

José Rodríguez of El Paso and José Menéndez of San Antonio anchor the liberal end of the Democratic delegation’s ideological spectrum, with Lib-Con Scores that are significantly more liberal than those of most of their Democratic colleagues.

In between these liberal and centrist groups is a much larger group of seven senators ranging from Judith Zaffirini of Laredo to Nathan Johnson of Dallas.