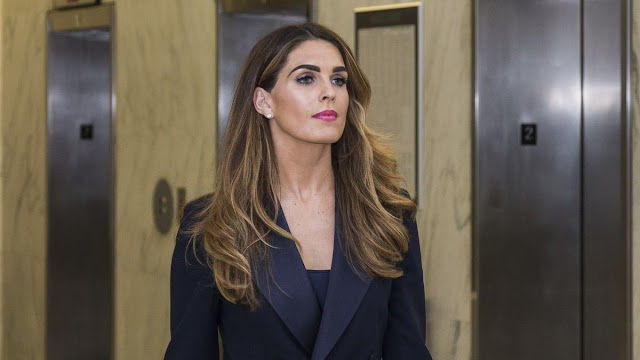 The House Judiciary Committee has released a transcript of a closed-door interview with former Trump aide Hope Hicks, showing White House lawyers repeatedly blocking her from answering questions about her work in the administration.

Hicks interviewed privately with the panel for nearly eight hours on Wednesday as part of its sweeping investigation into President Trump and his associates. She was compelled to testify under subpoena.

The transcript, which stretches 273 pages long, shows Trump administration lawyers repeatedly blocking Hicks from answering questions about her time in the White House by invoking the argument she is immune from compelled congressional testimony on the subject – a tactic that infuriated Democratic lawmakers on Wednesday.

White House lawyers blocked Hicks from answering questions 155 times, according to the committee, including  numerous questions about alleged episodes of obstruction by President Trump that are laid out in special counsel Robert Mueller’s report.

Hicks did, however, answer several questions about her work on Trump’s 2016 presidential campaign and the details laid out in the first volume of Mueller’s report on Russian interference.

The transcript shows that the daylong interview with Hicks, whose testimony is featured throughout Mueller's report, produced little new information. Meanwhile, it cements the White House’s efforts to thwart the Democrat-led investigation, which Trump has cast as an attempted “do over” of Mueller’s report.

In one exchange, Hicks said she had not read the Mueller report but that she had “lived” it.

She would not say whether the Trump campaign benefitted from WikiLeaks’ release of material from Hillary Clinton’s campaign obtained in a hack that was ultimately tied to the Russian plot to interfere in the election.

But she did say that the campaign experienced a feeling of “relief” when the emails came out.

“You would agree that the campaign was happy to receive information damaging to Hillary Clinton, correct?” asked Rep. David Cicilline (D-R.I.).

“I think that ‘happy’ is not – I don't think that's a fair characterization. I think ‘relief that we weren't the only campaign with issues’ is more accurate,” Hicks said.

She defended the campaign’s use of emails released by Wikileaks, describing it as simply “an effort made by the campaign to use information that was publicly available.”

Hicks said she was “very surprised” that Mueller’s report catalogued more than a 100 contacts between members or associates of the Trump campaign and Russia.

She claimed she never spoke to the president's eldest son, Donald Trump Jr., about the campaign possibly receiving information from foreign officials that would incriminate Clinton during the campaign. Hicks said she had “no recollection of any conversations” with Trump Jr. about the June 2016 Trump Tower meeting.

She also said she would not accept foreign dirt on an opponent in an election, invoking the so-called Steele dossier containing unverified allegations of Trump’s ties to Russia in her response.

“I'm asking you this based on your experience and the expertise you've developed, would you take foreign oppo information from a foreign government, if that were offered when working on a political campaign?” Norm Eisen, one of the committee lawyers, asked Hicks.

“You know, knowing how much chaos has been sowed as a result of something like the Steele dossier, no, I would not,” Hicks responded.

Later, Hicks said she would call the FBI if she believed the information were genuine or credible.

Hicks said she agreed with the U.S. intelligence community’s assessment that Russia interfered in the election, but she also said she believed it had been “weaponized by certain people with an agenda for the purpose of trying to undermine [Trump's] legitimacy.”

She added that she was not aware of anyone in the campaign communicating with individuals from Russia during the period of the campaign.

Hicks was prevented from answering questions about Trump’s direction that former White House counsel Don McGahn have Mueller removed; the resignation of onetime national security adviser Michael Flynn; Trump’s firing of FBI director James Comey; and Trump’s involvement in the crafting of a misleading statement about the June 2016 Trump Tower meeting, among other topics.

The transcript shows that, early on in the hearing, Chairman Jerrold Nadler (D-N.Y.) tangled with a White House attorney over the administration's argument that Hicks is immune from compelled congressional testimony about her time in the White House.

“As a matter of longstanding executive branch precedent in the Department of Justice practice and advice, as a former senior adviser to the President, Ms. Hicks may not be compelled to speak about events that occurred during her service as a senior adviser to the President. That question touched upon that area,” White House deputy counsel Michael Purpura said at the outset of the closed-door meeting, according to the transcript.

“With all due respect, that is absolute nonsense as a matter of law,” Nadler responded.

Lawmakers repeatedly tried to ask Hicks about her interviews with Mueller, but the White House objected.

Hicks was allowed to answer a few basic questions from Rep. Ted Lieu (D-Calif.) about the weather on her first day of work at the White House and where she would normally have lunch.

“It was a cloudy day,” Hicks said.

Hicks wasn’t only asked about Mueller’s report – she also fielded questions about former Trump attorney Michael Cohen and the hush money payments made to women who alleged they had affairs with Trump before the 2016 election, according to the transcript.

Hicks said she was never present when Trump and Cohen discussed Stormy Daniels, and that Trump asked her to make a public statement denying that he had a relationship with Karen McDougal during the campaign.

“I don't recall my specific words, but that there was no relationship between the two of them,” Hicks said.

“Did you ask the President whether that was true?” asked Rep. Sheila Jackson Lee (D-Texas).

“Not to my recollection,” Hicks said.

Cohen, who testified before Congress in February, pleaded guilty to campaign finance violations in connection with the payments and says he made them at Trump’s direction. Trump has derided Cohen as a liar.

Hicks told lawmakers that she doesn’t have “any direct knowledge” of whether Trump knew Cohen maid the payments to Daniels during the campaign.

Hicks also told lawmakers she had dinner with Trump in April – more than a year after she left the White House – and that the two reminisced about the 2016 campaign.

“It was more of a reminiscing about events from the campaign, rallies, things like that,” Hicks said.

When asked whether her congressional testimony might anger Trump, Hicks answered: “I think the President knows that I would tell the truth, and the truth is there was no collusion. And I'm happy to say that as many times as is necessary today.”

Republicans less frequently asked questions of Hicks during the interview, according to the transcript, and described it as a waste of time.

In a statement Thursday, the committee’s top Republican Doug Collins (R-Ga.) said the committee learned “nothing new” from the interview with Hicks and said Nadler would subpoena Mueller if he “were truly interested in gathering new facts.”

Nadler has been negotiating for Mueller’s appearance for several weeks but has not secured a deal for his testimony; Nadler has urged the special counsel to testify in public and said he would subpoena him if it comes to that.

The committee may look to challenge the White House’s immunity argument in court given Wednesday’s developments. Trump has similarly blocked McGahn from testifying before the panel, citing a newly-minted Office of Legal Counsel (OLC) opinion that he is immune from compelled congressional testimony about his service to Trump in the White House.

Nadler has already said he plans to go to court to enforce the subpoena issued to McGahn, after the House voted to authorize him to do so earlier this month.