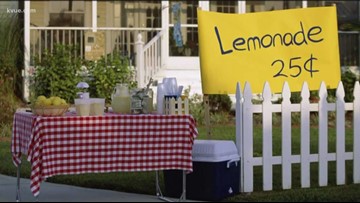 Texas governor Greg Abbott signed into law on Monday a bill that prevents cities and neighborhood associations from creating rules that block children from selling nonalcoholic drinks, like lemonade, on private property and in public parks.

The bill was inspired by a 2015 incident when Overton police shut down a lemonade stand run by two siblings raising money for a Father’s Day present.

At the time, state and city laws required the children to have two permits: a $150 street selling permit, and a health safety permit and inspection for the lemonade itself.

The bill passed unanimously in Texas’ House and Senate, and goes into effect on September 1, according to the Texas Tribune.

“A common sense law.” That was the phrase Governor Abbott used when he posted a video to Twitter on Monday showing him signing the bill into law. He then raised a glass of lemonade to the camera and said “Cheers!” Since then, the video has received over 17,000 likes and retweeted over 4,500 times.

It’s now legal for kids to sell lemonade at stands.

We had to pass a law because police shut down a kid’s lemonade stand.


Nationwide lemonade stand crackdowns. Iowa, Georgia, Wisconsin, Florida, and New York are some of the states since 2011 to have shut down lemonade stands run by children. The states reason the children might not be handling the lemonade properly (it can spoil without refrigeration) and demand the stands pay hundreds of dollars for vendor and health safety permits. Advocates say shutting down children’s lemonade stands deprives them of their first entrepreneurial experiences.