'Apologize for what?' Biden defends remarks about segregationist senators 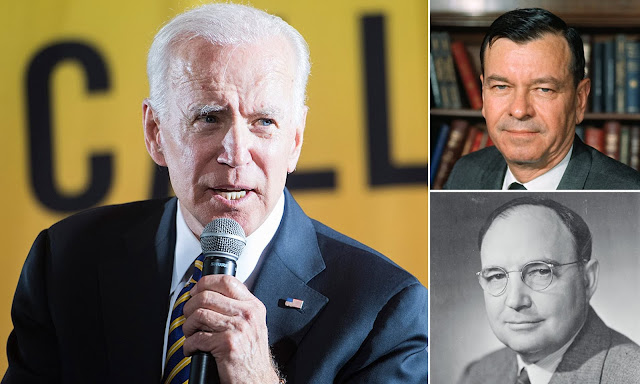 Former Vice President Joe Biden on Wednesday dismissed calls to apologize for invoking his working relationships with two segregationist senators as an example of "civility," saying that his Democratic colleagues knew better.

Asked by a reporter outside a fundraiser in Maryland whether he'd apologize for his Tuesday remarks, the Democratic presidential candidate responded, "Apologize for what?"

"He knows better," Biden added, referencing Sen. Cory Booker's (D-N.J.) call to apologize for the remarks. "There’s not a racist bone in my body. I’ve been involved in civil rights my whole career. Period. Period. Period."

Biden has faced mounting backlash in the past 24 hours after invoking former Sens. James Eastland (D-Miss.) and Herman Talmadge (D-Ga.) during a speech at a fundraiser Tuesday night.

Among other things, the 2020 Democratic presidential candidate cited his ability to work with the segregationist senators as an example of "civility" that no longer exists in Congress.

Biden also reminisced about working with Eastland and Talmadge in the Senate, saying Eastland never called him “boy.”

2020 Democratic candidates such as Booker, who is black, and Sen. Bernie Sanders (I-Vt.) demanded Biden apologize for the comment.

“You don’t joke about calling black men ‘boys,’” Booker said in a statement. “Men like James O. Eastland used words like that, and the racist policies that accompanied them, to perpetuate white supremacy and strip black Americans of our very humanity.

“I have to tell Vice President Biden, as someone I respect, that he is wrong for using his relationships with Eastland and Talmadge as examples of how to bring our country together. And frankly, I’m disappointed that he hasn’t issued an immediate apology for the pain his words are dredging up for many Americans. He should.”

Sanders added that Biden's comments were particularly damaging "at a time when the Trump administration is trying to divide us up with its racist appeals.” Other 2020 candidates, including Sen. Kamala Harris (D-Calif.), who is black, and Sen. Elizabeth Warren (D-Mass.) condemned Biden's position.

Biden stressed that he intended to make the point that "you don't have to agree" in order to pass major legislation.

"Here’s the deal. I could not have disagreed with them more. I ran for the United States Senate because I disagreed with the views of the segregationists," Biden said, adding that many of them were in the Senate when he first joined the body.

He went on to say that, despite those major differences, the Senate was able to pass an extension to the 1965 Voting Rights Act.

"You don’t have to like the people in terms of their views," Biden said. "But you just simply make the case and you beat them. You beat them, without changing the system."

Biden's campaign has pushed back fiercely against the criticism he's received from 2020 presidential candidates.

"[Biden] did not praise a segregationist. That is a disingenuous take. He basically said sometimes in Congress, one has to work with terrible or down right racist folks to get things done. And then went on to say when you can't work with them, work around them," Symone Sanders, a senior advisor for the Biden campaign, tweeted.