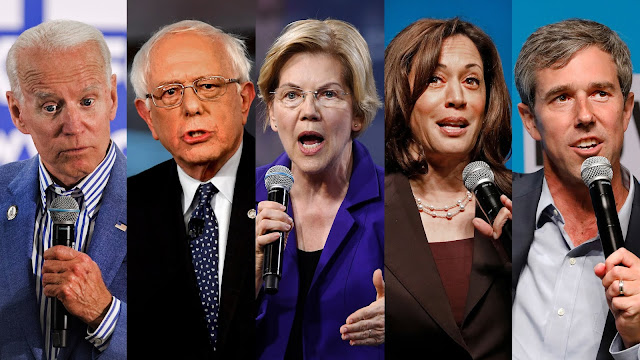 The Democratic National Committee (DNC) announced on Thursday the 20 Democrats running for president who will share the debate later this month, with four left out of the prime-time stage.

The debate marks the first time that so many 2020 contenders will share the stage at the same time, making it prime real estate for candidates – especially those struggling to break through in the race – to pitch their visions to voters.

But the candidates who didn’t qualify will likely find their campaigns on life support, struggling for new donations and media attention in the crowded field of 24 people.

The first debates will be split between two nights on June 26 and 27, with 10 candidates on stage each night. It will be broadcast on MSNBC, Telemundo and NBC.

It's still unknown which candidates will debate on which night. A lottery to determine the debate lineup will be held at NBC headquarters at 30 Rockefeller Plaza in New York on Friday.

The candidates with the highest polling averages will be split between the two nights along with candidates with lower polling averages to ensure there is no perception of a “junior” debate.
To qualify for the June debate, presidential hopefuls had to either collect contributions from at least 65,000 unique donors, including 200 in 20 different states, or notch at least 1 percent support in three polls.

Out of the 20 candidates who qualified for the first debate, 14 met both thresholds, while six met only the polling requirement.

Candidates left out will have another chance to make the debate in July under the same criteria, before they are set to double for debates in the fall.

But not making it to the stage in June will likely deal a consequential blow.

Bullock on Thursday disputed the DNC's conclusion, arguing it had met the polling threshold and challenging the committee's decision to not count a January survey published Feb. 9 by The Washington Post and ABC News. That survey asked voters which candidate they would support without naming the candidates itself, a type of question pollsters call open-ended.

The Montana Governor entered the race in May, months after some of the candidates, saying he was focused on his work in the state.

Meanwhile, Moulton, who entered the race in April, sought to play down the impact of his exclusion from the June debate, saying he was "not losing any sleep over it."

"I knew that getting in the race so late there was a strong chance I’d miss the first debate—and yes, I will. But fear not! I’m not losing any sleep over it, and neither should you," the Massachusetts congressman  said in an email to supporters.

"This race is a marathon, not a sprint," he added.