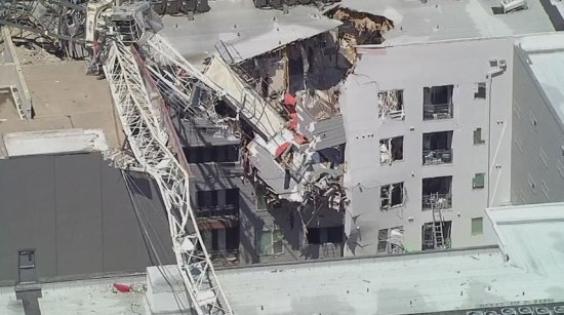 At least one person was killed and six were injured after a crane fell into a building during heavy storms in Dallas, Texas, on Sunday, the Dallas Morning News reported.

Six other people were hospitalized at Parkland Memorial Hospital and Baylor University Medical Center, according to the newspaper. Two were transported in critical condition, three were in serious condition and one was treated and released, according to the Morning News.

It is not immediately clear whether other people are trapped in the apartments or collapsed parking garage.

The cause of the collapse has not been confirmed, Evans reportedly said.

The crane fell after the National Weather Service declared a severe thunderstorm watch for the greater Dallas area until 7 p.m. Sunday, warning of heavy rain, damaging gusts and large hail.