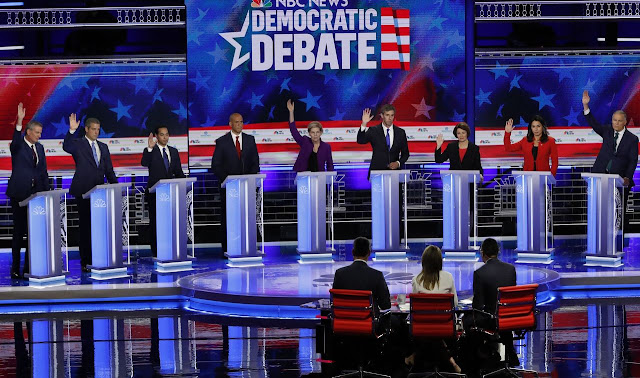 President Trump offered his first opinion via Twitter of the Democratic presidential debate roughly a half-hour into the Wednesday night event, making it clear he was not entertained.

The tweet came right after the debate had taken its first commercial break of the evening and as candidates began weighing in on the migrant family separations that have taken place during the Trump administration.

Trump tweeted while Air Force One was stopped in Alaska to refuel en route to its final destination in Japan.

During the stop in Anchorage, Trump met with troops stationed at Joint Base Elmendorf-Richardson. He quipped that he chose to spend time with the troops over watching the debate.

“I think they’re all going to do poorly,” Trump said of the Democratic candidates.

Sen. Lindsey Graham (R-S.C.), a 2016 Republican presidential candidate and staunch Trump ally, responded to the president by piling on the Democratic contenders.

"To associate this crowd with BORING is an unfair attack on BORING people," Graham tweeted. "BORING would be a step up!"

The president weighed in again minutes later to rip NBC News over a technical difficulty with audio and microphones that necessitated an extra commercial break, saying it was befitting a "fake news organization."