Analysis: Texas conservatives, in search of a new nemesis 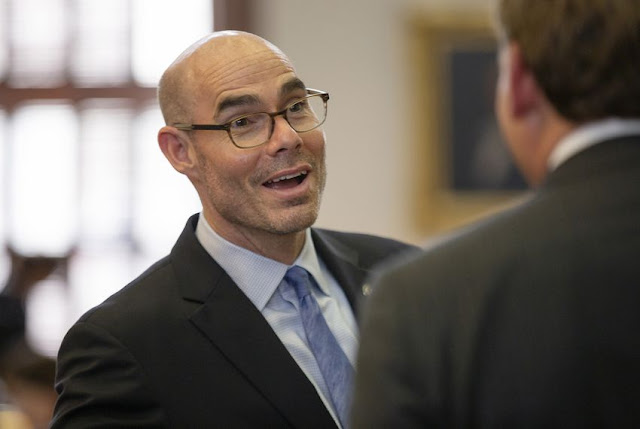 When longtime U.S. Sen. Edward Kennedy died in 2009, an irreverent Texas political consultant predicted the people who raise money for the two major political parties would miss the famous Massachusetts Democrat. Democrats loved him and touted him as a champion in their appeals, while Republicans hated him and touted him as a formidable opponent in theirs, the consultant said. “There goes the first paragraph of everyone’s fundraising letter.”

Which brings us to the tribulations of conservative antagonists of former Texas Speaker Joe Straus now that the San Antonio Republican has left public office. Straus’ departure ended years of steady carping from conservatives who didn’t think he was sufficiently Republican and that he was blocking their priorities.That departure alsocost those folks a first paragraph that has served them so well in organizing, activating and fundraising emails for the last decade.

Checked your email in the last few weeks? In their search for a new Straus, the far right has begun making a fresh enemy of the man elected by the Texas House to replace the former speaker.

He’s an odd choice for the job, and for a number of reasons.

He’s close to Gov. Greg Abbott, a hero of the right.

And the just-ended legislative session that struck some of those activists as an exercise in moderate mediocrity was hailed by Lt. Gov. Dan Patrick — another conservative Texas icon — as “winning the Super Bowl.” Patrick regularly pointed to his working relationship with Bonnen as a key factor in the success of the session, contrasting it with his prickly relationship with Straus.

Both Bonnen and Straus came into office with Republicans in the majority, but not in an overwhelming one. That first Straus success, in 2009, amounted to his cardinal sin: He overthrew sitting Republican Speaker Tom Craddick with what started as a coalition of most of the House’s Democrats and about a dozen-and-a-half Republicans. Straus won all five of his elections as speaker with most of the Republicans on his side, but that first impression stuck to him.

It didn’t help that the House was, for most of the 10 years Straus was in charge, more moderate than the Senate. The normal formulation — the House runs hot, the Senate is the calming element — flipped. The House became the brake on a Senate where Patrick, a Republican firebrand, was leading a body where Republicans were eager and willing to fall in behind him.

If you scratch out the names and look at the results, Bonnen’s House worked a lot like Straus’ did, and for some of the same reasons. Republicans had an 83-67 edge over the Democrats, not enough to bury the minority and not enough to ignore the Democrats on most issues. Conservative legislation from the Senate — an effort to ban municipal sick leave laws, a proposal that would have made it harder for cities to remove Confederate monuments — died in the House. It went the other way, too: Patrick singlehandedly spiked House legislation that would have lowered the penalties for people caught with small amounts of marijuana.

The big result of this session, however, would have been surprising then, which explains the smiles on the faces of the governor, lieutenant governor and speaker. The Legislature passed a sweeping public education bill that reworks the financing of public schools in Texas, raises pay and benefits for veteran teachers, increases state funding and cuts school property tax rates. They passed a property tax bill that requires voter approval of local property tax revenue increases of more than 3.5%. They passed major mental health, school safety and human trafficking bills.

Those three — and most legislators, too — came out crowing about the things that got done, largely ignoring what was left undone.

But the conservative wing of the party is restive. Bonnen, hoping to continue the comity and goodwill that marked this session, said House members should stay out of one another’s reelection races, threatening to punish those who campaigned against colleagues of either party.

Going into an election year where Republicans are trying to regain some of the 12 House seats they lost to Democrats in 2018, and where Democrats are trying to win the nine additional seats that would give them a majority, that didn’t sit well with Republicans. Neither did Bonnen’s statement that his Speaker pro tempore — Joe Moody of El Paso — would make a good speaker should the Democrats get the majority.

Watch your inbox. That’s the kind of material that makes for a solid first paragraph in a fundraising appeal.