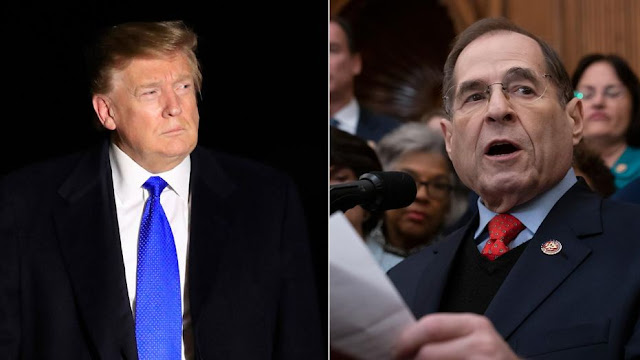 The White House is rejecting a sweeping request from the House Judiciary Committee for documents, suggesting the panel is attempting a "do-over" of special counsel Robert Mueller’s Russia probe and calling on the committee to narrow its scope.

“It appears that the Committee's inquiry is designed, not to further a legitimate legislative purpose, but rather to conduct a pseudo law enforcement investigation on matters that were already the subject of the Special Counsel's long-running investigation and are outside the constitutional authority of the legislative branch,” White House counsel Pat Cipollone asserted in a 12-page letter to House Judiciary Chairman Jerrold Nadler (D-N.Y.) on Wednesday.

“The only purpose for this duplication seems to be harassing and seeking to embarrass political opponents after an exhaustive two-year investigation by the Department of Justice did not reach the conclusion that some members of the Committee apparently would have preferred. That, of course, is not a permissible purpose for demanding confidential information from the Executive,” Cipollone wrote.

Nadler had requested a trove of documents from the White House in early March as part of his committee's probe into allegations of obstruction, public corruption and abuses of power by President Trump and members of his inner circle.

The panel is seeking documents from the White House related to communications between Trump and former White House counsel Don McGahn; the resignation of Michael Flynn as national security adviser; the termination of James Comey as FBI director; the June 2016 Trump Tower meeting; and any discussions about Mueller’s potential firing.

Nadler blasted the White House's stance as "ridiculous," asserting that the administration's stonewalling prevents the president from being held accountable.

"They say the Justice Department can't hold him accountable since the sitting president cannot be indicted," Nadler told reporters Wednesday afternoon. "And now they're saying that Congress cannot hold a president accountable. This is ridiculous. It would make the president above the law."

It also asserts that Trump’s decision to cooperate with the special counsel’s investigation by offering documents and written answers does not constitute a waiver of privilege “for any other material or for any other purpose,” quoting from an April letter from White House attorney Emmet Flood to Attorney General William Barr that criticized Mueller’s exhaustive report.

The White House counsel argued that “the appropriate course is for the Committee to discontinue the inquiry discussed in the March 4 letter.”

“As I have repeatedly made clear, we respect the authority of Congress to make legitimate requests for information to aid it in the task of legislating and will work with the Committee through the constitutionally mandated accommodation process to provide the Committee with information it can properly seek,” Cipollone wrote.

“It would greatly advance the first step in that process if the Committee were to narrow the sweeping scope of the requests in the letter and articulate the legislative purpose and legal support for each of the disparate requests it wishes to pursue, including by addressing each of the legal deficiencies that I raise in this letter,” he continued.

News of the letter broke as Nadler was convening a House hearing on executive privilege and congressional oversight with several legal experts.

In opening remarks Wednesday morning, Nadler said the White House was trying to impede more than 20 congressional investigations on a range of subjects — including “obstructing” the committee’s own sweeping probe.

“Until recently, no president had stated that his plan across the board would be to fight all oversight of Congress,” Nadler said. “The president is using the powers of his office to impede an investigation into his own alleged misconduct.”

The White House has uniformly refuted House Democrats’ requests for documents on a number of investigations into the administration, stonewalling efforts to obtain information on the administration’s security clearance process, communications involving McGahn and other topics.

In most cases, however, it has stopped short of formally asserting executive privilege.

Nadler unveiled his panel’s investigation at the beginning of March, sending requests for documents to 81 individuals, organizations and executive branch entities. The list includes current and former members of the Trump administration as well as members of the president’s family and campaign.

Mueller, who concluded his investigation weeks later, did not find evidence to charge members of the Trump campaign with conspiring with Russia to interfere in the election. Mueller also did not reach a conclusion on whether Trump obstructed justice.

The White House and Republicans have declared case closed, claiming the special counsel vindicated Trump of allegations of “collusion” and pointing to Barr’s judgment that the evidence was insufficient to accuse Trump of obstruction.

House Democrats are intent on drilling forward with their investigations into the conduct of the president and his administration, determined to serve as a check on the executive branch. Nadler is particularly interested in digging further into allegations of obstruction by Trump and has subpoenaed McGahn to testify publicly next week as part of the investigation.

Cipollone wrote to Nadler earlier this month saying the White House had directed McGahn not to produce documents sought by the committee, and asking the chairman to submit future requests related to Mueller’s report directly to the White House.

Trump has also asserted executive privilege over Mueller’s unredacted report and underlying evidence, for which Nadler had issued a subpoena. His panel voted along party lines last week to hold Barr in contempt for not complying with the subpoena, after the Justice Department notified the committee it would recommend Trump assert executive privilege over the materials.

Trump has repeatedly railed against Democratic investigations, arguing that his administration’s cooperation with Mueller’s probe was sufficient, and that Democrats are investigating him as a political tool.

“All they're doing is trying to win an election in 2020,” Trump told reporters Monday.