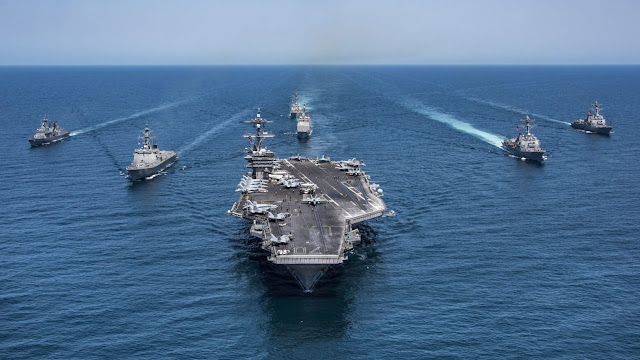 The United States is deploying a carrier strike group and a bomber task force to the Middle East in response to what it called "troubling and escalatory indications and warnings" from Iran, national security adviser John Bolton announced on Sunday.

Bolton said in a statement that the USS Abraham Lincoln Carrier Strike Group and a bomber task force would be deployed to a region overseen by the Pentagon's U.S. Central Command, whose area of responsibility includes the Middle East.

"In response to a number of troubling and escalatory indications and warnings, the United States is deploying the USS Abraham Lincoln Carrier Strike Group and a bomber task force to the U.S. Central Command region to send a clear and unmistakable message to the Iranian regime that any attack on United States interests or on those of our allies will be met with unrelenting force," Bolton said.

"The United States is not seeking war with the Iranian regime, but we are fully prepared to respond to any attack, whether by proxy, the Islamic Revolutionary Guard Corps, or regular Iranian forces," he added.

It's not unusual for an aircraft carrier to be deployed to the region, but the language used in Bolton's statement suggests the U.S. is seeking to ramp up pressure on Iran to counter what the White House perceives to be a potential threat.

The statement also comes as new violence flares between Israel and the Palestinians in Gaza. The group Islamic Jihad, which has a foothold in Gaza, is seen as an Iranian proxy.

In April, the U.S. designated Iran's Revolutionary Guard a foreign terrorist organization, the first time the designation has been applied to a government entity. Iran responded in kind, designating all U.S. troops in the Middle East terrorists.

“We will answer any action taken against this force with a reciprocal action. So the leaders of America, who themselves are the creators and supporters of terrorists in the (Middle East) region, will regret this inappropriate and idiotic action," hundreds of Iranian lawmakers said in a statement accompanying the designation.