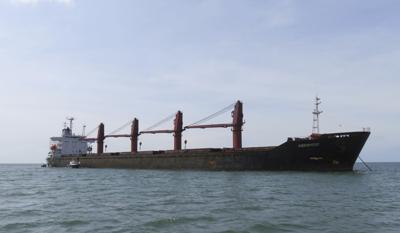 The U.S. attorney for the Southern District of New York (SDNY) and officials with the attorney general's office and FBI announced Thursday the first seizure of a North Korean cargo vessel for violating U.S. sanctions.

The civil forfeiture complaint claims the M/V Wise Honest was used to illicitly ship coal from North Korea and to deliver heavy machinery back to the country.

“Today’s civil action is the first-ever seizure of a North Korean cargo vessel for violating international sanctions. Our Office uncovered North Korea’s scheme to export tons of high-grade coal to foreign buyers by concealing the origin of their ship, the Wise Honest," Geoffrey Berman, attorney for the SDNY, said in a statement.

"This scheme not only allowed North Korea to evade sanctions, but the Wise Honest was also used to import heavy machinery to North Korea, helping expand North Korea’s capabilities and continuing the cycle of sanctions evasion. With this seizure, we have significantly disrupted that cycle."

Officials said the seizure was justified under the International Emergency Economic Powers Act and the North Korea Sanctions and Policy Enhancement Act of 2016, which say entities tied to the proliferation of weapons of mass destruction are prohibited from using the U.S. financial system.

The Wise Honest imported machinery while concealing its affiliation with the Korean People’s Army, according to officials.

One of the groups which used the ship, Korea Songi Shipping Company, paid for improvements and equipment purchases through U.S. financial institutions which the complaint described as "unwitting."

Officials said the ship is in the custody of the United States.