Trump says farmers will benefit from trade war with China 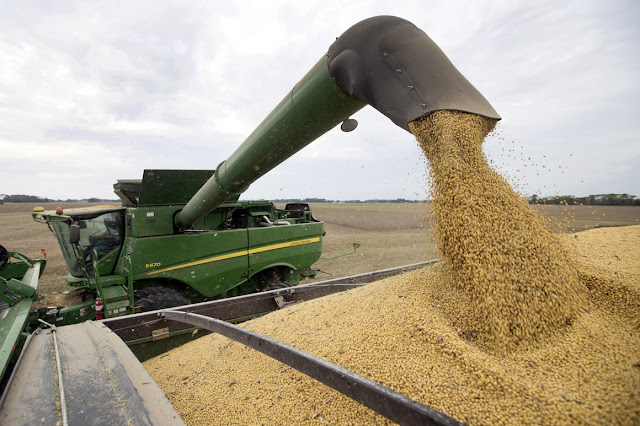 President Trump on Tuesday said that farmers would be among the biggest beneficiaries of a new round of tariffs levied against China, promising that his administration would be "making up the difference" to U.S. farmers if the levies cause exports to fall.

In a pair of tweets, the president said that "forgotten" U.S. farmers would benefit from funds raised by the U.S. with the tariffs, even as other Republican lawmakers have warned that Americans would take an economic hit from the measures.

"Our great Patriot Farmers will be one of the biggest beneficiaries of what is happening now," Trump tweeted. "Hopefully China will do us the honor of continuing to buy our great farm product, the best, but if not your Country will be making up the difference based on a very high China buy."

"This money will come from the massive Tariffs being paid to the United States for allowing China, and others, to do business with us," he added. "The Farmers have been “forgotten” for many years. Their time is now!"

The president's comments were among a string of tweets from the Trump that took aim at critics of his trade policy following a breakdown in the U.S.-China negotiations that had seemed close to producing a deal.

The Trump administration's representatives said last week that Chinese negotiators had gone back and rewritten parts of the deal, erasing commitments previously conceded to U.S. officials.

Stocks plunged on Monday amid the news of stalled negotiations with China, with businesses reacting to retaliatory measures implemented by China following the White House's decision to hike existing duties on Chinese goods last week.

Republicans such as Sen. Tom Cotton (R-Ark.) have warned that the brunt of the economic woes will fall on U.S. farmers and businesses, despite the president's confidence.

"There will be some sacrifice on the part of Americans, I grant you that," Cotton said in an appearance Monday on "CBS This Morning."

"But also that sacrifice is pretty minimal compared to the sacrifices that our soldiers make overseas that are fallen heroes or laid to rest."