Tim Conway passes away at age 85 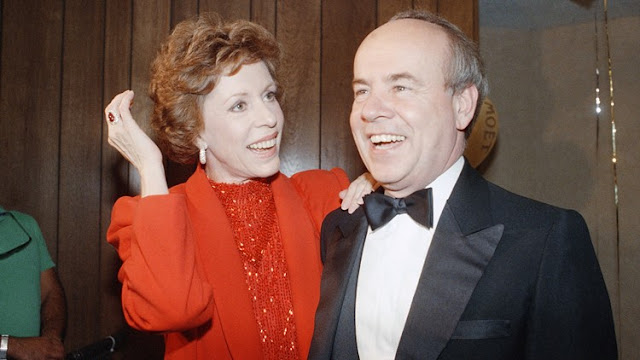 Tim Conway, the legendary comedian who had a knack for improv and cracking up his fellow cast members on The Carol Burnett Show, has died. He was 85.

Conway died Tuesday at 8:45 a.m. in the Los Angeles area, his rep confirmed to PEOPLE. In August it had been reported that Conway was suffering from dementia, but PEOPLE’s report Tuesday said he suffered complications from Normal Pressure Hydrocephalus prior to his death and had no signs of dementia or Alzheimer’s.

Born and raised in Ohio, Conway wasn’t looking to make it big in Hollywood. “I started out wanting to be a jockey,” he told EW in 2011. “Having fallen off as much as I did and being terrified of horses, that didn’t work out so well!”

He went on to serve two years in the army, then returned to his native Cleveland where he started writing comedy for local TV stations.

He eventually earned a spot on ABC’s The Steve Allen Show as a regular cast member. But he didn’t achieve nationwide fame until taking the role as the blundering Ensign Parker on the ’60s sitcom McHale’s Navy. He then went on to star on The Tim Conway Show in 1970 for a short stint before finally joining The Carol Burnett Show. Conway’s 11 years on the sketch show garnered him four Emmy Awards and a Golden Globe thanks to his hilarious characters like the Old Man and Mr. Tudball.

“Carol gave us the opportunity to do whatever we wanted on the show, which was always great because we would surprise not only the audience but her, too,” Conway told EW. “There were so many things we did on the air that were never done until we actually did them for taping. One was the Old Man. When we got the script that week, Harvey said, ‘Wait a minute. He’s not doing an old man. I do the best old man there is.’ So all week, Harvey is saying, ‘What are you going to do as an old man?’ and I said, ‘I have no idea’ And I didn’t. I really didn’t do that shuffle with the Old Man until we were actually taping the show. When I started shuffling across the room, I noticed the rug was gathering in front of me and I thought, ‘Jeez, if they let this go, we’re going to be here for three days.’ But they let it go and it was created out of air.”

Later in his career, Conway provided the voice for Barnacle Boy on Spongebob Squarepants and even made a special appearance on the second season of 30 Rock, playing ‘50s TV icon Bucky Bright, for which he received an Emmy. He also won a best guest actor in a comedy Emmy in 1996 for his turn on Coach as Hayden’s (Craig T. Nelson) gardener Kenny.

Conway’s other TV credits include guest appearances on Married… With Children, Mad About You, Glee, Two and a Half Men, and Mike & Molly.

Conway is survived by his wife, Charlene, and seven children (sons Jaime, Tim Jr., Pat, Corey, and Shawn, and daughters Jackie and Kelly) whom he shares with his first wife Mary Anne Dalton.