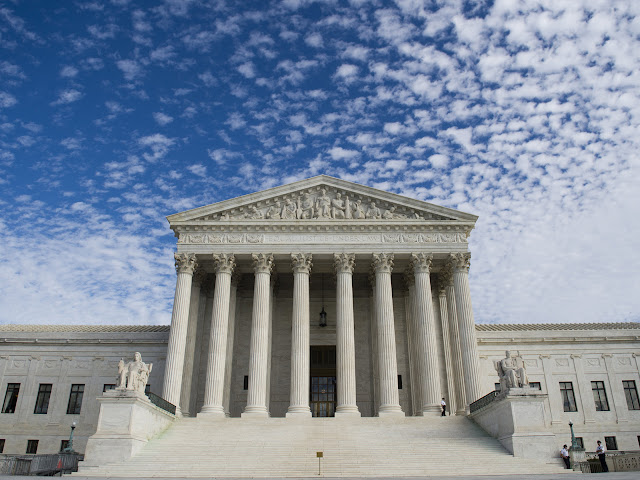 The Supreme Court is set to go back into session on Monday to begin issuing some of its biggest decisions of the year.

From high-stakes rulings for the Trump administration to revisiting battles over the separation of church and state, here are five big decisions to watch for.

The Trump administration’s efforts to add a question about citizenship landed in front of the justices last month, just weeks before the deadline to get the query added to the census.

Opponents argue that asking about citizenship will cause non-citizens and other immigrants to skip the question or the census altogether, leading to an inaccurate count of the population. Census data is used to determine congressional representation as well as federal funding.

But the Trump administration argues that it needs to collect the data in order to assist the Justice Department in its enforcement of the Voting Rights Act.

The court’s more liberal justices came out swinging during oral arguments, questioning the administration’s facts and suggesting the question was improperly added to the census.

But the court’s conservative majority signaled they back adding the question, making a victory for Trump seem likely.

Justice Samuel Alito also said it would be “arbitrary and capricious” for Commerce Secretary Wilbur Ross to accept staff’s claims that they could build a statistical model to collect data about citizenship without it yet existing, instead of just collecting the information through the census.

The Commerce Department, which issues the decennial census, has said that it needs to start printing materials in June in order to get the survey out on time. The court typically waits until the end of the term to issue blockbuster decisions like this one, but experts say the justices are likely to make an exception in this case in order to make that deadline.

Three federal judges had already blocked the question’s addition. If the court does rule in favor of the question, it will be yet another instance of the justices upholding a controversial Trump action.

The justices appeared to be divided in their approach to a pair of partisan gerrymandering cases, pointing back to their past struggles to address the issue.

The high court has previously noted that state legislature’s drawing of congressional districts is an inherently political process, and that it can be difficult to tell exactly when those maps have become too partisan.

Some of the court’s conservative justices questioned during oral arguments on the new cases whether they were even the right body to call the shots, suggesting that the states should handle it themselves.

“Have we really reached the moment, even though it would be a big lift for this court to get involved, where the other actors can't do it?” Kavanaugh asked.

But at least one of the court’s liberal justices seemed more inclined to make a ruling.

Justice Ruth Bader Ginsburg asked if there was “any genuine doubt” that Maryland Democrats intended to strip Republicans of one seat in the House with their redrawing of the congressional district.

With two lower courts recently striking down district maps in Michigan and Ohio and ordering them to be redrawn ahead of the 2020 elections, the pressure is on the Supreme Court to issue a decision that could help resolve at least some of the legal questions at hand.

Race’s role in jury selection for a death penalty case

The justices have signaled that they are willing to rule in favor of an inmate who claims that racial discrimination during the jury selection process tainted his murder trials.

Curtis Flowers of Mississippi alleges that prosecutor Doug Evans repeatedly stopped black individuals from sitting on the jury for his trials for the murder of four people in a furniture store.

Flowers, who is African American, claims that during his first four trials, Evans struck every potential black juror. His fifth trial ended in a mistrial, meaning there is no information about the race of the struck jurors, but during a sixth trial the prosecutor accepted the first qualified black juror before rejecting five more.

Prosecutors are allowed to strike a certain number of individuals from juries for undisclosed reasons, but a previous Supreme Court ruling found that those strikes can’t be used to reject jurors on the basis of race.

The Supreme Court is considering whether a prosecutor’s history of discrimination during jury selection should factor into any court’s determinations on new discrimination allegations. Flowers claims that Evans does have such a history and that it should be considered – and the justices signaled that they will likely side with the inmate.

The case even drew remarks from the typically silent Justice Clarence Thomas, the only African American on the Supreme Court, whose question during the case was only the second time in a decade that he has spoken up during oral arguments.

The justices can either order a new trial for Flowers or affirm the Mississippi Supreme Court’s ruling upholding Flowers’s conviction and death sentence.

The court is again tasked with taking up a case over the separation of church and state, this time over a state commission’s care-taking of a large cross as part of a memorial for veterans.

The American Legion had built 40-foot tall cross in a memorial park for World War I veterans in Maryland, and the Maryland-National Capital Park and Planning Commission eventually took over responsibility for the park, including caring for the cross.

But non-Christian residents took up issues with the cross over its Christian symbolism, and argued that the government’s care of the cross is in violation of the Constitution’s separation of church and state.

During oral arguments in the case in February, the justices suggested they would allow the cross to stay.

But they also appeared wary of making a precedent-setting decision that would directly state whether or not religious items can be presented on secular or government property.

Can Apple face a class-action lawsuit?

Apple has found itself in the crosshairs of the high court, as the justices debate whether to allow a class-action lawsuit over the tech giant’s alleged monopoly over iPhone apps to move forward.

A group of consumers want to sue the company, claiming that app developers are artificially inflating the price for apps because Apple receives 30 percent of each sale made through the App Store.

The court’s liberal minority signaled that it backed the consumers’ right to sue the tech giant. But the stance of the conservative majority was less clear, meaning the court could again be divided on one of the biggest cases of the term.

Attorneys for Apple and the U.S. government argued that the developers are the ones responsible for any price increases. But some of the justices, including Kavanaugh, questioned that argument.

“How do we know the 30 percent charge is not affecting the price?” he asked.

If the justices rule in favor of the consumers, it will be a major blow for Apple. The company is citing a 1977 Supreme Court ruling that found damages in antitrust battles should only go to those immediately suffering because of the anti-competitive behavior.

And the company argues that only app developers can sue over any alleged monopoly, not any app purchasers.