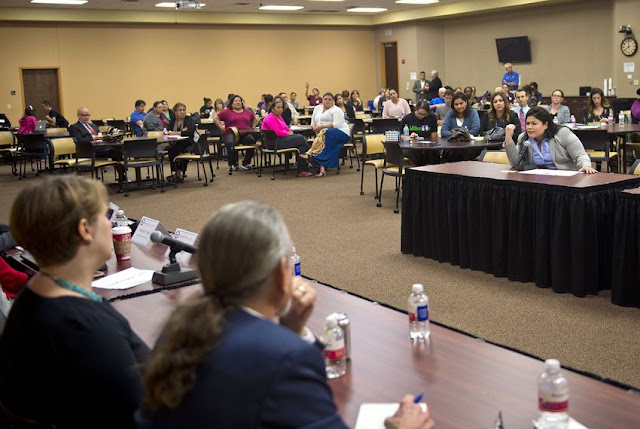 Federal officials will give Texas' special education programs another round of scrutiny this week, with visits planned to monitor how six school districts are educating students with disabilities.

The U.S. Department of Education is set to make those visits as part of an ongoing review; it finished a thorough investigation last year and found Texas had violated federal education law by failing to provide students with disabilities with a proper education. Since then, state officials said they have completed all necessary steps to fix the long list of problems with special education and are waiting for the federal government to clear them.

This week, federal officials will monitor progress at schools in Houston ISD, Laredo ISD and Everman ISD, following up on a 2017 visit. They also will visit special education programs in Comal ISD, Spring Branch ISD and Lubbock ISD, chosen at random, according to the state.

The 2018 federal investigation found that Texas effectively capped the percentage of students statewide who could receive special education services and incentivized some school districts to deny services to students in need. It also found that school administrators refused to evaluate some students who might have disabilities to see if they qualified for federally funded special education services. Instead, those administrators saw those evaluations as a "last resort" for students struggling to learn. And many educators fundamentally misunderstood their federal obligation to identify students with disabilities who need additional services, the investigation found.

Federal officials OK'd some aspects of Texas' improvement plan in October but said Texas should do more to make sure school districts understand how to comply with federal special education law.

State officials say that problem has been addressed.

But advocates say districts have not received guidance or additional resources from the state to help improve their services for students with disabilities.

"Our districts and our members are anxiously awaiting guidance," said Kristen McGuire, director of governmental relations at the Texas Council of Administrators of Special Education. "Right now they're doing everything they can, absent [Texas Education Agency] guidance, and so hopefully the Department of Education will see that when they come to those visits."