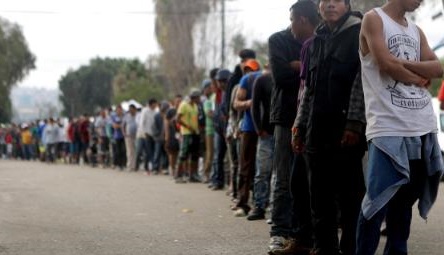 The 9th Circuit Court of Appeals on Tuesday ruled that the Trump administration can continue to enforce a policy requiring some asylum-seekers to remain in Mexico while their cases are processed.

The ruling from the San Francisco-based appeals court places a stay on a preliminary injunction on the asylum policy issued by a lower court.

The panel of judges wrote in the opinion that the Department of Homeland Security (DHS) had shown that it was likely to suffer irreparable harm if the policy was halted because it “takes off the table one of the few congressionally authorized measures available to process the approximately 2,000 migrants who are currently arriving at the Nation’s southern border on a daily basis.”

The judges also found that the policy was not implemented in violation of the Administrative Procedure Act because it is not one of the policies covered by the act and therefore does not require certain processes to take place ahead of its implementation.

Several immigration groups had sued DHS over the policy on behalf of migrants affected by the policy, arguing that the practice was improperly implemented and put the migrants in harm’s way.

However, some of the judges were highly critical of DHS’s implementation of the policy in individual opinions authored on the decision, signaling that they could oppose the policy in a later ruling.

Judge Paul Watford, an Obama nominee, wrote in his opinion that he believes the administration’s treatment of asylum-seekers is in violation of the U.S.’s obligation to not return those migrants to countries where they could face persecution.

He pointed to DHS guidelines that state that immigration officers ask applicants who are being returned to Mexico if they fear persecution or torture in the nation only if the migrants say so themselves first.

“It seems fair to assume that at least some asylum seekers subjected to the [policy] will have a legitimate fear of persecution in Mexico,” Watford wrote.

And he said it was “equally fair to assume” that many migrants would not know they wouldn’t be returned to Mexico if they faced persecution there and that it could result in the return of some asylum-seekers to Mexico who should have been allowed to stay in the U.S.

Watford wrote that he is “at a loss to understand” how the federal agency wasn’t already asking migrants if they could face harm if they were returned to Mexico.

“DHS has not, thus far, offered any rational explanation for this glaring deficiency in its procedures. (One suspects the agency is not asking an important question during the interview process simply because it would prefer not to hear the answer),” Watford wrote in his opinion, adding that he believes the immigration groups could win their argument against the policy as a result.

And Judge William Fletcher wrote that he believes current federal law does not allow for the policy to take place, calling DHS's stance in the case "clearly and flagrantly wrong."

The Clinton nominee rejected DHS’s argument that its interpretation of federal law allows for a category of migrants generally allowed to stay in the U.S. during asylum proceedings to be considered as a different category allowed to be returned to other countries during their cases.

And he pointed to recent writings from the Supreme Court and Attorney General William Barr defining the two separate categories of migrants to further criticize DHS’s argument.

“I regret that my colleagues on the motions panel have uncritically accepted the Government’s arguments,” Fletcher wrote. “I am hopeful that the regular argument panel that will ultimately hear the appeal, with the benefit of full briefing and regularly scheduled argument, will be able to see the Government’s arguments for what they are—baseless arguments in support of an illegal policy that will, if sustained, require bona fide asylum applicants to wait in Mexico for years while their applications are adjudicated.”

Omar Jadwat, the director of the American Civil Liberties Union's Immigrants' Rights Project, said in a statement that the asylum policy is putting the affected migrants "at serious risk of harm every day" it continues.

However, he pointed to the judges who raised legal concerns about the policy as "good reason to believe that ultimately this policy will be put to a halt."