Trump accuses Clinton of 'destroying the lives' of campaign staffers 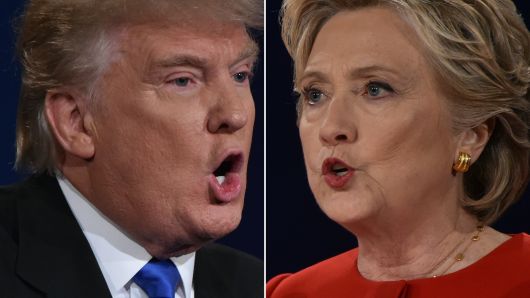 President Trump argued Thursday that former Secretary of State Hillary Clinton "destroyed the lives" of his campaign staffers, appearing to refer to the prosecution of former Trump campaign staffers in the now-shuttered special counsel investigation.

During an interview with Fox News's Sean Hannity, Trump argued that the investigation into whether his campaign colluded with the Russian government was an attempted coup to thwart his campaign and end his presidency.

"She's destroyed the lives of people that were on our campaign," Trump told Fox.

"This was a coup. This was an attempted overthrow of the United States government. ... This was an overthrow, it's a disgraceful thing," he said.

Trump has focused new ire on Clinton in recent days following her remarks earlier this week claiming that Trump would have been indicted for obstructing justice had he not been the sitting president.

"I think there’s enough there that any other person who had engaged in those acts would certainly have been indicted," Clinton said this week at Time magazine's Time 100 Summit, citing "the rule in the Justice Department that you can’t indict a sitting president."

"The whole matter of obstruction was very directly sent to the Congress," Clinton added. "And if you read that part of the report, it could not be clearer."

The president frequently criticized the Mueller investigation and top officials at the FBI who originally called the Russia investigation, referring to them as "angry Democrats" on Twitter.

Earlier this week, he denied claims made in Mueller's report stating that he had ordered former White House counsel Don McGahn to fire Mueller, one of the most damaging charges in the report.