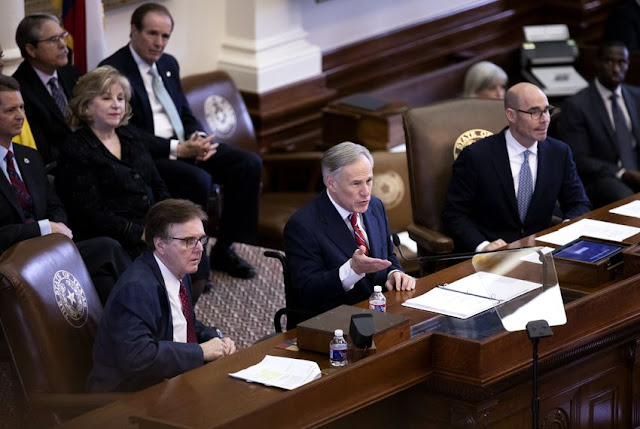 By Edgar Walters and Aliyya Swaby

Texas’ Republican leadership wants to raise the taxes that consumers pay when they go shopping in order to lower the taxes that homeowners and business owners pay on their properties.

How would that work?

The state sales tax would rise from 6.25% to 7.25%, generating an estimated annual $5 billion in coming years. That would take the total sales tax in most cities to 9.25% because local governments can raise the sales tax an additional 2 percentage points. Supporters say a higher sales tax rate would generate enough revenue to buy down property tax rates by 20 cents per $100 valuation at a time when Texas homeowners and businesses are feeling squeezed by rising bills.

But raising the sales tax would cause poor Texans to pay a higher percentage of their income in taxes while the richest Texans and businesses are most likely to enjoy tax relief under the proposal.

To be clear, the proposal faces long odds to becoming law. House and Senate leaders intend to make the change in a constitutional amendment, which would need votes from two-thirds of lawmakers in both chambers to advance. Ratification of the amendment would require voter approval in a statewide election. And Gov. Greg Abbott has said he won’t endorse the measure unless lawmakers also pass bills limiting local property tax increases.

The sales tax swap proposal from Abbott, Lt. Gov. Dan Patrick and House Speaker Dennis Bonnen needs buy-in from conservative lawmakers opposed to the idea of raising any taxes in a year of surplus — and from Democrats wary of a proposal that would shift more tax burden onto low-income Texans.

A regressive tax is one that takes a larger percentage of income from poorer people than richer people. Because low-earning people spend a larger share of their income on sales taxes, raising the sales tax rate causes their total tax bills to grow relatively larger. Texas’ sales tax is one of the state’s most regressive ways of earning revenue, according to the Texas Comptroller.

A Texas Tribune analysis of state tax data found that increasing the sales tax to buy down property tax rates would likely raise the percentage of income that the bottom 80% of Texans spend on taxes. Only the top 20% of Texans — those in households earning more than about $150,000 — would probably see a reduction in the percentage of their income that they pay in taxes. The analysis assumes that raising the sales tax rate would not significantly change Texans’ consumption patterns.

Still, many conservatives consider regressive taxes like the sales tax to be equitable because everyone, regardless of income level, pays the same tax rate.

“I'm trying to shift from a property tax system to a consumption tax system so you control what you pay,” Abbott recently wrote on Twitter.

With two-thirds of each legislative chamber needed to pass the sales tax swap resolution, Republican leaders need to get Democrats on board. And Democrats oppose hiking a regressive tax on the grounds that it would unnecessarily burden low-income Texans while benefiting the highest-income Texans, especially if the proposal does not yield any additional revenue for public programs.

Some fiscal conservatives have joined Democrats in opposition to a higher sales tax because they don’t want the state to raise any taxes, concerned it could dissuade business owners from relocating to Texas. “The proposed sales tax hike would take the state in the wrong and opposite direction by imposing an overall increase in the state tax burden,” said Grover Norquist, president of conservative anti-tax advocacy group Americans for Tax Reform, in a letter to House lawmakers.

On Tuesday, state Sen. Paul Bettencourt, R-Houston, said there was not “a tremendous appetite over here in the Senate for that proposal.”

“Whether it’s income tax, property tax, sales tax or whatever tax, I’m not voting for an increase,” he told Lubbock radio host Chad Hasty. Later Tuesday, Bettencourt walked back his comments, saying that in the absence of a specific, final measure, he hasn’t taken a position.

Republicans have also floated ideas for more modest property tax cuts that would affect Texans’ tax bills in different ways, depending on where they live and how much their homes are worth. The House passed a school finance bill, House Bill 3, that would lower tax rates statewide by 4 cents per $100 valuation and limit school districts with higher rates from increasing them.

In addition, Democrats and some Senate Republicans are backing an increase to the mandatory homestead exemption for school district taxes, which would offer similar tax relief for Texans regardless of their home values. But Abbott is opposed to the idea, and he took his criticisms to Twitter on Monday.