US sends B-52 bombers to Europe amid tensions with Russia 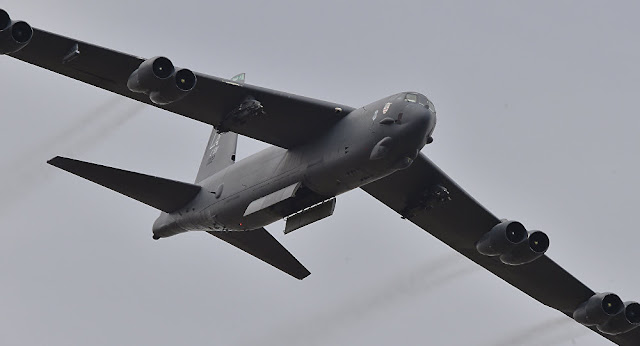 The U.S. has sent six nuclear-capable B-52 bombers to Europe for “theater integration and flying training” with NATO partners and local allies amid tensions with Russia.

The move is widely viewed as a message to the Kremlin as Moscow makes aggressive moves in the region, CNN noted in a report on Thursday, adding that four of the nuclear-capable bombers conducted flights around Europe, near the Norwegian, Baltic and the Mediterranean seas, on Monday.

B-52 crews from both RAF Fairford and Anderson Air Force Base in Guam also conducted training missions in an area east of the Kamchatka Peninsula in the Russian Far East, the Air Force said on Wednesday.

The Air Force said last week that the warplanes would operate out of the United Kingdom's RAF Fairford, adding that the deployment will help prepare the station as the forward operating location for U.S. bombers.

“The deployment also includes joint and allied training in the U.S. European Command theater to improve bomber interoperability,” the Air Force said in a statement. “Training with joint partners, allied nations and other U.S. Air Force units contributes to our ready and postured forces and enables us to build enduring and strategic relationships necessary to confront a broad range of global challenges.”

The deployment comes amid high tensions in the region in the wake of Russia's annexation of Crimea from Ukraine five years ago.

Earlier this week, two Russian generals announced the deployment nuclear-capable bombers and medium-range missiles to the Crimean Peninsula, but later backed off the pledge, CNN noted.