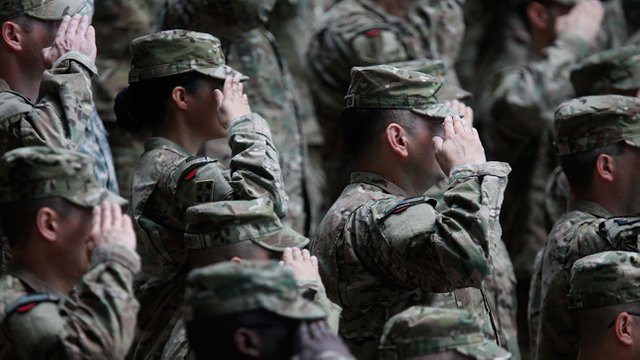 The Trump administration signaled Friday it intends to implement a ban on transgender people serving in the military after a federal court struck down the last injunction against the policy the previous day.

“In light of the district court’s decision yesterday to stay the preliminary injunction in Stone v. Trump … there is no longer any impediment to the military’s implementation of the Mattis policy,” Justice Department lawyers wrote in a filing in federal court in Washington, D.C.

“Defendants therefore respectfully provide notice to the Court that the Acting Secretary of Defense plans to release a Directive-Type Memorandum (DTM) formally implementing the new policy in the near future.”

U.S. District Judge George Russell III announced Thursday he was striking down the last of four injunctions against the transgender service member ban, though advocates for transgender troops say a stipulation in a ruling means one remains in effect.

Russell, an appointee of former President Obama who serves on the U.S. District Court for the District of Maryland, cited in his ruling the Supreme Court’s 5-4 decision in January to stay two of the injunctions.

Obama declared in 2016 that transgender service members would be allowed to serve openly, but President Trump announced a reversal to that policy in 2017, saying that transgender troops would be prohibited from serving “in any capacity.”

Four lawsuits were filed against the policy, and lower courts in all four cases issued injunctions to the rule as the cases made their way through various courts.

Former Defense Secretary James Mattis laid out a policy in March 2018 that would allow transgender people to serve if they do so "in their biological sex."

Advocacy groups have repeatedly slammed the policy as discriminatory against transgender people who simply seek to serve their country.

“Each and every claim made by President Trump to justify this ban can be easily debunked by the conclusions drawn from the Department of Defense’s own review process,” Joshua Block, senior staff attorney with the ACLU LGBT & HIV Project, said of the Thursday ruling. “Our clients are brave men and women who should be able to continue serving their country ably and honorably without being discriminated against by their own commander in chief.”