'Enemy of the American people': Trump's attacks on the media could back to haunt him 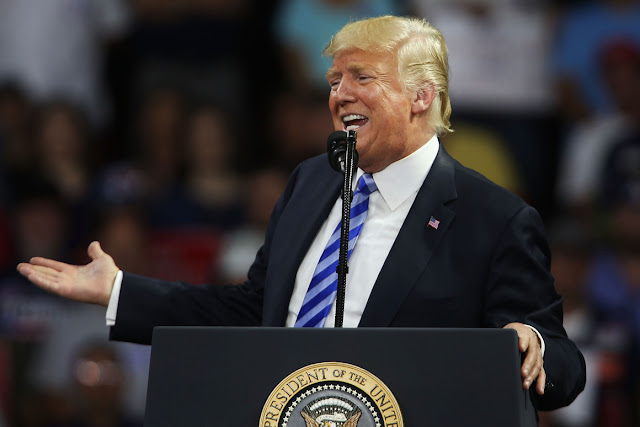 If history holds, President Trump’s declaring the press “the enemy of the American people” may be a large part of his demise.

The relentless frontal attack on the news media is part of Trump’s effort to discredit any entity he perceives could hold him accountable, which includes Congress and the judiciary.

But the president may want to study how John Adams lost his reelection in large part because he managed temporarily to throttle free speech through laws, intimidation and imprisonment.

Following the first competitive presidential election of 1796, newspapers loyal to Vice President Thomas Jefferson attacked President John Adams continually. Jefferson clearly was using his friends in the press to set up a rematch with Adams in 1800, and Adams had had enough.

So, in 1798, Adams implored Congress to pass the Alien and Sedition Acts, giving the central government unprecedented power. These laws had provisions that allowed the government to expel foreign opponents, round up and incarcerate aliens, make it more difficult for newly-minted citizens to vote and, most troubling, forbid any criticism of government.

Adams claimed the acts were necessary to conduct a cold war with France. Jefferson and his Democratic-Republican Party leaders claimed the laws were meant to silence them. Adams used the poor standing of the press as a political wedge issue that mirrors what is happening today.

Trump, in calling the press “dishonest scum” and floating changes to libel laws to make it easier to sue news organizations, shows he is a true threat to the Fourth Estate.

Making it easy to sue newspapers could effectively, preemptively censor free expression — not just on the editorial pages, but also by limiting reporting on government and candidates. Changed libel laws that, in essence, allow the rich to sue at will could even endanger criticism of the majority party by the minority party.

CNN reports that Trump said: “We’re going to open up libel laws, and we’re going to have people sue you like you’ve never got sued before.”

Trump’s promise of civil fines is less severe than the criminal components of the 1798 Sedition Act, but the silencing effect could be the same.

The Sedition Act forbade, under the risk of fines and imprisonment, any person or group to speak, write or publish anything considered false, scandalous or malicious that brought Congress and/or the president into contempt or disrepute.

One of the first people convicted of the Sedition Act was Congressman Matthew Lyon of Vermont, who was imprisoned for criticizing Adams for “an unbounded thirst for ridiculous pomp.” Upon his jailing, public opinion of the Sedition Act began to shift. Lyon’s constituents re-elected him during his four months in prison.

Accounts vary about the number of arrests and indictments, but most scholars cite 25 arrests and at least 14 verifiable indictments brought under the Sedition Act — mainly against Republican editors and newspapers, since Adams was a Federalist. It’s impossible to know how much criticism was not published out of fear.

Adams and his Federalists claimed the laws did not violate the First Amendment, because the government was not preemptively forbidding anyone from speaking or printing but exposed them to incarceration if they published.

The convictions, and a gradual understanding by the public of what the Sedition Act meant to free speech, created an uproar and provided a major wedge issue, helping Jefferson to win the 1800 race.

Adams and the Federalists protested loudly that their actions had no political intent, but interestingly, the act did not forbid criticism of the Office of the Vice President, then occupied by Jefferson.

Trump may derive some perverse pleasure in watching his most rabid supporters attack penned-up members of the media at his rallies, but if so, he does this at his own peril.