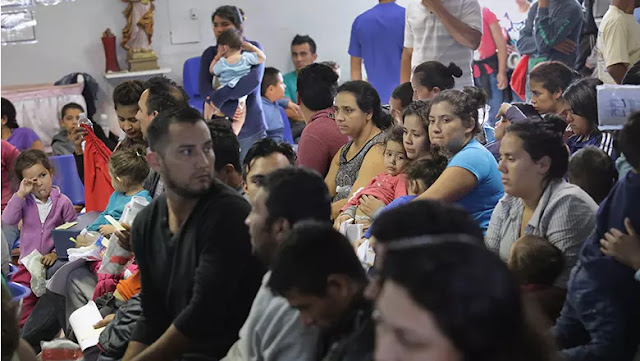 The U.S. Border Patrol has reportedly released hundreds of migrants from detention centers in Texas along the U.S.-Mexico border due to severe overcrowding in U.S. Immigration and Customs Enforcement (ICE) facilities.

The Los Angeles Times reported Thursday that a group of 200 migrants, mostly consisting of families with children, was released into the Rio Grande Valley on Wednesday, while 50 more were released the day before. More releases will occur every day until facilities are brought down to manageable levels of detainees, according to officials.

“It is a crisis,” a Border Patrol official who remained anonymous told the newspaper. “It’s not a self-proclaimed crisis.”

Border apprehensions surged in February to more than 66,000, a jump of 38 percent from the month before and tying some of the highest levels of migrant apprehensions in the last ten years, according to government figures.

“It reached a breaking point,” an official with ICE told the newspaper.

A volunteer with a local Texas organization that assists migrants told the newspaper that the Trump administration's decision to release migrants in large groups could be meant to persuade Americans of the conditions on the border.

“I feel like they’re trying to put some stress on the volunteer and advocacy groups, all of us touting ‘There’s no crisis down here,’” activist Elizabeth Cavazo told the newspaper. “Maybe it’s for them to save face because they’ve been calling this a border crisis and everything’s peachy keen down here. That’s what it feels like.”

News of the Trump administration's solution to the sudden influx of migrants was first reported by The Wall Street Journal on Tuesday. The program comes despite the president's often-stated opposition to "catch-and-release" policies, which he has characterized as a Democratic policy.

The developments come after President Trump last Friday issued the first veto, stymying Congress’s attempt to block him from obtaining funds for his wall at the U.S.-Mexico border without lawmakers’ approval.

Trump, who has called border security a "crisis," said Americans would be put at risk if the “dangerous” and “reckless” resolution became law.

The House next week is expected to vote on overriding Trump’s veto, but leaders lack the two-thirds support of the chamber necessary to pass the bill over the president’s objections.