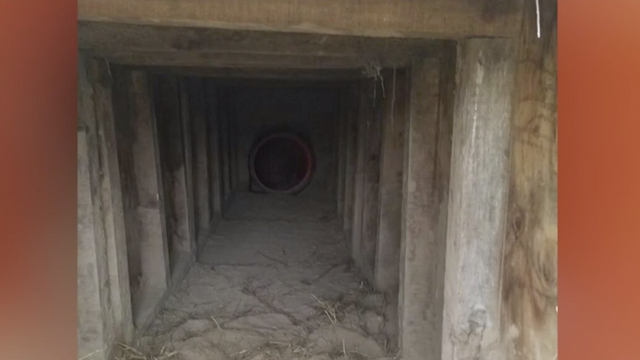 Border patrol agents in Texas have reportedly discovered a 60-foot tunnel being built near the Rio Grande River leading toward Mexico.

Authorities found the tunnel, which was still under construction, in Hidalgo, Texas, a local CNN affiliate reported Friday.

"You've seen them on the news in Arizona and New Mexico and stuff like that, but I've never seen one in the Valley,” Orthal Brand Jr., who is president of the Hidalgo County Water Improvement District 3, told the local station. “That's the first one I've seen that's in our back yard."

Brand said he has used his agency's resources to aid federal authorities in the past, but he told the station that getting rid of the tunnel won’t be easy. The tunnel is reportedly hidden near the bottom of a 30-foot embankment and is very difficult to see.

Brand said he is working with the Border Patrol and U.S. Fish and Wildlife to find another way to get rid of the tunnel. He told the Rio Grande Guardian earlier this week that his team also plans to enlist the help of an explosion company.

“My men climbed down and looked at it. It needs dynamite to blow it. I would like to praise the Marine division of Border Patrol,” he told the international news service.

“Boots on the ground would not have seen it. Helicopters would not have found it. Drones, sensors, would never have found it,” he added. “You could only see it from the river. They looked at the cliff and found it. It was all covered up with bamboo and brush. It looked kind of dry, which alerted them to it.”