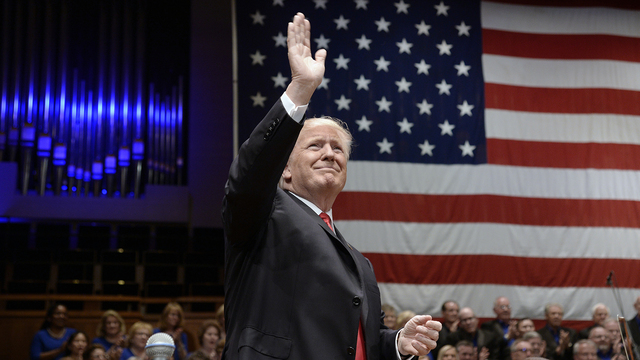 President Trump's campaign on Wednesday announced that he will hold his first rally of 2019 in El Paso, Texas, next week.

The rally, scheduled for Monday, comes amid ongoing negotiations between Trump and congressional Democrats as the president tries to secure more than $5 billion in funding for his long-promised border wall.

The location of the event is notable. El Paso sits right on the U.S.-Mexico border and was referenced by Trump on Tuesday night in his State of the Union address as he sought to make the case for the border wall.

"The border city of El Paso, Texas, used to have extremely high rates of violent crime — one of the highest in the country, and considered one of our nation's most dangerous cities,” Trump said. “Now, with a powerful barrier in place, El Paso is one of our safest cities.”

The rally will be Trump’s seventh in Texas since he announced his candidacy for president in 2015, though it will be his first in El Paso.

"As the President continues his fight to secure the border, there's no better place to demonstrate that walls work than in El Paso," Michael Glassner, the chief operating officer of the Trump campaign, said in a statement.

The rally also comes as a growing number of Democrats enter the party’s 2020 presidential primary field. That field grew larger last week, with Sen. Cory Booker (D-N.J.) becoming the latest to jump into the 2020 race.

El Paso is also the hometown of former Rep. Beto O’Rourke (D-Texas), the Democratic Party’s 2018 Senate nominee in Texas who has been floated as a possible presidential contender in 2020.