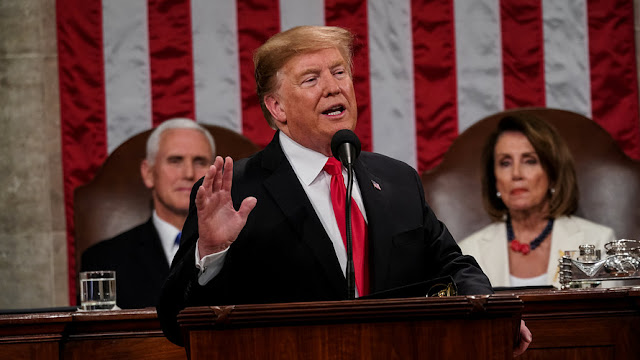 President Trump said Tuesday the U.S. will be able to reduce the presence of troops in Afghanistan amid “progress” in negotiations with the Taliban.

“In Afghanistan, my administration is holding constructive talks with a number of Afghan groups, including the Taliban,” Trump said during his State of the Union address. “As we make progress in these negotiations, we will be able to reduce our troop presence and focus on counterterrorism.”

“And we will indeed focus on counterterrorism,” he added.

Trump made the comments while defending his plans for Afghanistan and Syria, which have met push back from Congress and the foreign policy establishment.

“As a candidate for president, I pledged a new approach. Great nations do not fight endless wars,” he said, to some applause in the chamber.

In December, Trump announced he would withdraw all 2,000 U.S. troops from Syria, a decision that precipitated the resignation of James Mattis as Defense secretary and which was derided by lawmakers in both parties as premature.

Earlier Tuesday, Gen. Joseph Votel, the top U.S. commander in the Middle East, said Trump made the announcement without consulting him. The Senate also Tuesday afternoon approved 77-23 a bill that warns against a "precipitous" withdrawal in Syria and Afghanistan.

Trump also declared victory against the Islamic State in Iraq and Syria (ISIS) when he said in December that troops would be withdrawn from Syria.

On Tuesday, he shifted a bit, stating that “virtually” all territory has been retaken from ISIS.

“Now, as we work with our allies to destroy the remnants of ISIS, it is time to give our brave warriors in Syria a warm welcome home,” he said.

In Afghanistan, reports late last year said Trump was planning to halve the 14,000 U.S. troops there. But no official announcement of a drawdown has come.

The U.S. troops in Afghanistan have a dual mission of training, advising and assisting Afghan forces in their fight against the Taliban and conducting counterterrorism missions against groups such as ISIS and al Qaeda.

Zalmay Khalilzad, the Trump administration’s special envoy for Afghanistan reconciliation, last week told The New York Times that talks with the Taliban in Qatar yielded a preliminary framework for a peace agreement.

Khalilzad has stressed that there remains much work before a final agreement. But in general, the Taliban would agree under the proposed deal to not allow Afghanistan to be used by terrorists to plot attacks, which would allow the United State to withdraw from the country after the longest war in U.S. history.

On Tuesday night, Trump touted that he “accelerated” negotiations to reach a political settlement in Afghanistan, adding, “the opposing side is also very happy to be negotiating.”

“We do not know whether we will achieve an agreement,” he said. “But we do know that after two decades of war, the hour has come to at least try for peace.”

In a brief statement after the speech, acting Defense Secretary Patrick Shanahan did not mention Trump's comments on Afghanistan or Syria.

"In his State of Union address tonight, President Trump reaffirmed his unwavering commitment to support our troops and to protect American national security interests at home and abroad," Shanahan said in the statement. "Under President Trump's leadership, we are focused on the full implementation of the National Defense Strategy: increasing lethality, strengthening alliances and partnerships, and reforming the way we do business."